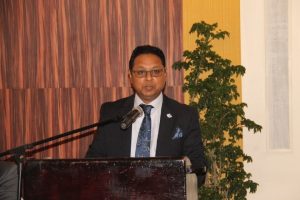 Chairman of the Trinidad and Tobago Transparency Institute (TTI), Dion Abdool Saturday night urged Guyanese to learn from his country’s mistakes as this country prepares to become a major oil producer.

Addressing the Transparency Institute of Guyana Inc.’s (TIGI) annual fund-raising dinner held at the Pegasus Hotel, he recommended that Guyana’s Extractive Industries Transparency Initiative (GEITI) be the independent third party through which revenues are accounted for and reconciled and the transactions.

“Like TTTI, the Guyana Transparency Institute sit at the EITI table, they must insist for transparency and accountability in the reporting of the revenue so that there can be no tax leakage. Learn from our lessons well in Trinidad; it will redound to your benefit,” he said.

ExxonMobil’s Senior Director, Public & Government Affairs in Georgetown, Kimberly Brasington earlier this month stated that, “Our intention is that we are disclosing them to an independent third party that is identified by the government and the government also discloses to that same independent third party the revenues that they are receiving and then the third party is supposed to reconcile in and out and make that public on annual basis,” she told reporters. The mechanism could include the GEITI which is a member of the Norway-headquartered EITI.

His advice was provided against the background of Trinidad and Tobago’s Energy Minister identifying “tax leakage”- declining taxes and royalties- as the reason for a drop in revenue rather than merely a fall in production and the amount of hydrocarbons. 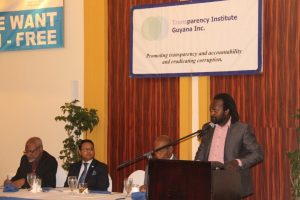 Warning Guyana against believing that they could be ripped off only by foreigners, he cited another example involving a domestic Trinidad and Tobago company that had been recently involved in a fake oil scandal. He said an audit of the state oil company found that the country was fleeced of millions of dollars during a few months. “In just a few months, they found that the volumes recorded by and reported and based on which  the extractor was being paid were wrong to the tune of many, many millions of dollars. Learn from our experiences,” he said

The Chairman of TTTI emphasised the need for Guyana pays close attention to inflows and outflows by accounting, reconciling revenues. “I suggest that, as in Trinidad and Tobago, this is an area for Guyana and you all in this room and other civil society members  to pay attention to and more so now that you are on the cusp of such great wealth,”

“This is of paramount importance and there must be an independent third party looking at the revenue coming from the corporation that is extracting the oil and from the  entity- the government- that is receiving it. Somebody must do some reconciling there as a start,” he added.

The TTTI official said it is important for credible data and other types of information are available to build trust and as a vital prerequisite if government, citizens and corporations are to safeguard wealth and maximise revenue.

Meanwhile, Abdool announced that a Pan-Caribbean team of Transparency chapters will soon be established to advocate for good governance,  transparency and legislation such as those on freedom of information, political campaign financing and whistle-blowing. Barbados, Grenada, St.Kitts and Nevis, St. Lucia and the Cayman Islands are among those that will initially be part of the regional network.

Although Guyana’s score on Transparency International has improved from 29 in 2015  to 34 in 2016 and 38 in 2017. the TIGI President, Troy Thomas cautioned against complacency as Guyana heads towards commercial oil production in 2020.  “This does not mean that all is well since being the best of the worst is not the ultimate goal. The reality is that Guyana is still among the highly corrupt countries in the world and the imminent petroleum production and the cash flow that is likely to result can threaten whatever gains have been made. We need to remain watchful and strengthen our resolve so that Guyana and Guyanese receive the benefits of our resources and not the few entrusted with the power to manage them,” he said.

Thomas noted that Guyana’s “impressive movement upwards” since the APNU+AFC coalition came to power in May 2015 was based on responses by ordinary Guyanese and experts. This amounts, in my view, to an impressive movement upwards since the coalition government won the May 2015 general elections. “This indicates to us that the citizens that were asked to respond to certain questionnaires and the Guyanese experts that were asked to give their opinions on what’s going on in Guyana believe that encounters of corruption in he daily lives of our citizens have been on the decline. It means that we are gaining ground in the fight against corruption,” he said.

The TIGI President, however, listed several lingering concerns such as the Georgetown City Council parking meter contract without public tender, failure to place the US$18 million signature bonus with ExxonMobil into the consolidated fund, the retention of the pharmaceutical storage bond contract, breaches in health sector procurement, and exorbitant expenditure by government ministers.