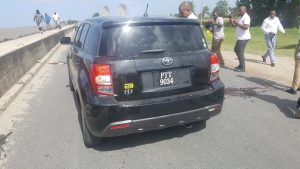 The car in which the suspected thieves were travelling

The three men, who were gunned down on the Georgetown Seawall earlier Thursday were identified, with two of them suspected of trailing a customer who had minutes earlier exited Scotia Bank, Robb Street.

A 9 MM Pistol along with a magazine containing seven live rounds and four spent shells was found next to the body of Cordis, police added.

The Guyana Police Force said in a subsequent encounter seconds later,  two men were observed on a CG motorcycle near the motorcar in which the now dead suspects had been travelling. The policemen said one of the men on motorcycle fired several rounds at the police who again returned fire, resulting in the death of a third person.

He has been identified as 57-year old Errol “Dynamite” Adams, a known character of Dartmouth, Essequibo Coast and Buxton, East Coast Demerara. His accomplice sped away on the motorcycle, police said. 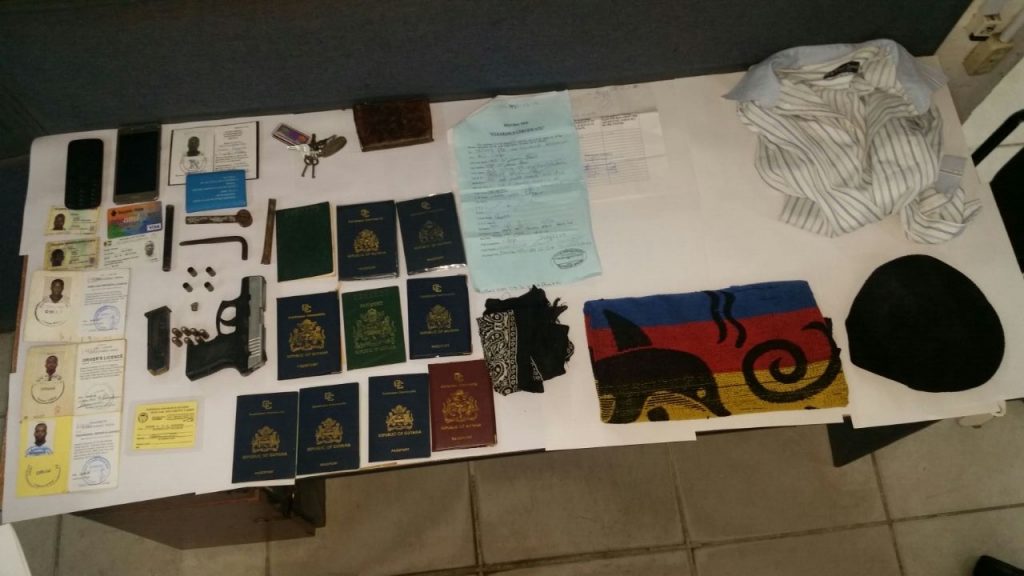 The firearm, ammunition and other items found in the dead suspects vehicle at the Georgetown Seawall.

Assanah and Adams were previously arrested in connection with several offences and Dextroy Cordis was previously granted bail on a simple larceny charge to wit ‘trunking’, police said.

Investigators said the motorcar, which was driven by Assanah, was searched and the following items were found inside: a supernumerary precept, one driver’s licence, ten passports belonging to himself and family members, a key used by trunkers, two handcuff keys, a bandanna and clothing.

The Guyana Police Force suggested that Thursday’s encounter might have resulted in a dent in the ring that has been robbing customers shortly after they leave commercial banks. “Following several incidents of robbery under arms, committed on customers who would have gone to various commercial banks to conduct financial transactions within recent times, surveillance and collaboration with key stakeholders were improved,” police said in their statement. 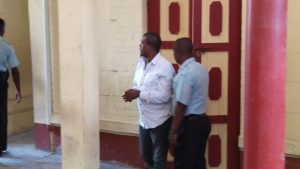 Thursday’s encounter, by police accounts, began at about 10:30 AM when undercover operatives near Scotia Bank, Robb Street observed a motorcar with two suspicious looking characters was in the vicinity.

“Ranks of an anti-crime patrol in an unmarked vehicle were alerted and followed this vehicle which by this time was observed following a customer who had exited the said bank and was in a motorcar.

This observation continued and culminated at the Kingston Seawall where the customer had by this time parked his motorcar.

At this time the two suspicious looking characters in the motorcar, drove up to the customer’s vehicle and exited, one brandishing a small arm at the customer.

At the same time the police anti-crime patrol, which by now was in close proximity called out to the suspicious looking characters but the one who was armed discharged several rounds at the police who returned fire,” police said.

The roof and windshield of the police anti-crime vehicle were damaged by the gunfire from the suspects.