ExxonMobil signals reluctance to renegotiate contract with Guyana; rules out skullduggery in operations 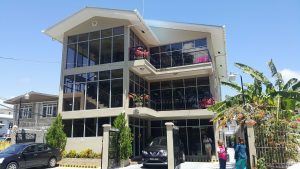 ExxonMobil on Tuesday assured that there would no skulduggery to inflate expenses or steal Guyana’s oil and at the same time appeared reluctant to renegotiate its controversial Production Sharing Agreement with Guyana although larger quantities of oil are being found in the Stabroek Block.

In response to a question at Private Sector Commission-organised seminar on Guyana’s oil and gas sector, ExxonMobil’s Senior Director, Public & Government Affairs in Georgetown, Kimberly Brasington did not categorically rule out the possibility of the revised 2016 agreement be renegotiated but suggested very strongly that the company was unlikely to favourably consider doing so. “While I am not going to say ‘no’ or ‘yes’- never say never- I am going to say that we believe firmly in that principle that there is real value in the sanctity of a contract and there are a lot of eyes on Guyana right now watching to see how this plays out; if this is a stable environment in which to do business,” she said.

Stressing that “the sanctity of a contract is a very important” especially in a country that is new to the oil and gas sector and currently attracting foreign investments”, the ExxonMobil official said her company would not violate the contract and hoped the Guyana government would do likewise. “I am not opposed to the calls for renegotiation, I am not opposed to people standing up for what they believe in but right now ExxonMobil has a contract with this government and we intend to stick to it; we are going to hold up our side of that. We are going to do everything under it and I do hope the government does the same,” Brasington said.

The Guyana government has already ruled out renegotiating the contract and has since announced the establishment of a Department of Energy and the hiring of an international firm to guide the allocation of additional oil blocks to international petroleum companies.

Against the background of repeated calls for the agreement to be renegotiated to give Guyana more than two percent royalty and a higher than US$18 million signature bonus, she reiterated that her company was under no compulsion to revise the accord. When the original agreement was inked in 1999, she said no oil was found in the basin offshore Guyana and so there was no justification for a hefty signing bonus to encourage government to award any company the right to explore and produce oil. “In the case of Guyana, companies weren’t lining up to explore…When we went into negotiate in 2016, we already had a valid contract….and so the effort of renegotiating a signing bonus might have been higher in a country where you were trying to get into for the first time and there were proven hydrocarbons and so you knew that a block and you knew that a lot of companies have found oil in this block and is your risk is lower… you might be willing to pay a really high signing bonus but in the case of Guyana, we already had the block,” she said.

Brasington said if Guyana had asked for a very high signing bonus, Exxon Mobil would have said “no thanks, we would stay with the 1999 agreement”. She said there was no scope for a production bonus and it is for the life of the entire operations even if more oil is found.

And although the latest oil find at Pacora earlier this month that has so far pushed Guyana’s daily oil output to 500,000 barrels per day, the ExxonMobil official said the signing bonus would still remain at US$18 million.

In the area of transparency, ExxonMobil said all payments to Guyana would be verified to a third-party that government here would have to agree on before hand. “Our intention is that we are disclosing them to an independent third party that is identified by the government and the government also discloses to that same independent third party the revenues that they are receiving and then the third party is supposed to reconcile in and out and make that public on annual basis,” she told reporters. The mechanism could include the Guyana Extractive Industries Transparency Initiative (GEITI) which is a member of the Norway-headquartered EITI.

In terms of the possibility of stealing crude oil, the ExxonMobil spokeswoman in Guyana said there would be a technological and human verification system of the amount of oil pumped from the well to the Floating Production Storage and Offloading (FPSO) vessels to oil tanker that come to collect oil for buyers. She noted that, like in other parts of the world, a government employee and an ExxonMobil employee would be on the ship to monitor the lifting of the crude. “Part of the commitment is that you have got three points of independent verification on numbers in terms of what’s coming in and what’s going out. It is a very robust monitoring system that we are not going to make up and it exists around the world and we’ll use it here,” Brasington added.

“There will always be a Guyanese representative on the FPSO when offloading is occurring,” she said.

Asked what safeguards would there be to avoid ExxonMobil inflating its costs of production by submitting bogus invoices, Brasington said it would be “unethical” and the company is committed to obeying United States laws that prohibit fraud. “The assurance comes from an American company and being held accountable to United States standards and more Foreign Corrupt Practices Act and all of the  tax guidelines that we have to follow as an American company,” she said.

She said the incentive for ExxonMobil is to keep costs down because “it is more profit oil split” and at the end of the day, those costs are subtracted from oil payments.  With regards to Guyana’s ability to effectively audit ExxonMobil’s books, she suggested that the country “invest in some capacity building and/or hire the right people who can audit it”. “It’s an important responsibility and they should take it seriously because the government has to be accountable to the people and part of that accountability is being able to audit the contractor effectively,” she added.