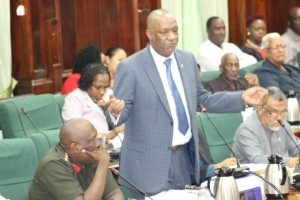 The Guyana government has decided to refuse permission to more international airlines that merely have one or two aircraft because passengers continue to be frustrated by long delays and cancellations, Minister of State Joseph Harmon announced.

“All I would ask of you is don’t bring no one-plane airline or no two-plane airline so that you take all the people money so that when is the peak season, you leave all of them in Guyana. We don’t want that. We will not allow any other operation like that- those fly-by-night operations,” he said. He recommended that airlines have a firm structure or a solid airline with “enough aircraft and back-up facilities” to serve the travelling public properly.

Over the decades, permission had been granted to newcomers such as Tropical Airways, Universal Airways and EasyJet, all of which had left hundreds of passengers stranded in Guyana and North America before they had eventually collapsed

Addressing faithful at a Town Hall meeting organised by the North American Region of his People’s National Congress Reform (PNCR) party , Harmon said government has already pulled in Caribbean Airlines and Fly Jamaica to express concerns about price gouging of persons flying the Guyana route.”We have spoken to Caribbean Airlines about price gouging. We have spoken to Fly Jamaica as well about that and I believe at some time the Minister of Public Infrastructure had reason to threaten them to raise the bond which they actually lodge”, he said at the meeting held in Irvington, New Jersey.

Responding to a call by an attendee for Guyana to re-establish a national airline because he and other Guyanese “are tired of being exploited”, Harmon ruled out government running commercial businesses. Instead, he called on the large number of Guyanese to take up the challenge of establishing an indigenous Guyanese national airline. “The question of airline is an opportunity which exists for our Guyanese people to explore and exploit,” he said, adding urging top Guyanese executives who have worked in multi-national companies to submit a concrete proposal.

The State Minister stated bluntly that, “the government is not going to bring back no Guyana Airways” but he told the attendees “you bring it and we will sanction it” so that they could provide a quality service and become rich.

The state-owned Guyana Airways Corporation (GAC) was shut down in 2001 after it became bankrupt, by which time the country’s civil aviation’s capacity remains downgraded until today by the International Civil Aviation Organisation and the United States Federal Aviation Administration. This means that locally-registered airlines are barred from flying to the US, the most lucrative international destination from Guyana.