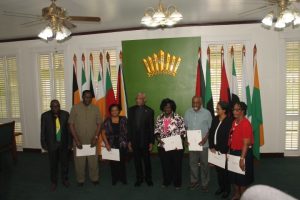 President David Granger flanked by members of the Teaching Service Commission shortly after they were sworn in.

Field Secretary of the GTU, Lance Baptiste’s comments came shortly after the swearing in of TSC members before President David Granger at State House. Baptiste expects the Commission to “immediately” address the promotion of senior teachers and the appointment of junior ones.

“Since 2015, we haven’t had any senior appointment. All the persons, who were appointed last year, were those who were supposed to be appointed in 2015 so we have no appointments for 2016 and 2017. There are a lot of vacancies there waiting to be filled,” Baptiste told Demerara Waves Online News.

President Granger remarked that under Guyana’s Constitution, “the service commissions insulate citizens against inference and interference by the executive”. He added that TSC provides for the appointment of teachers based on merit as well as discipline and remove them if necessary.

“The work of the Commission will contribute to ensuring a corps of qualified, trained and highly motivated teachers in our education system. It will assure these these teachers of fairness in their appointments and due process in the exercise of discipline,” the President.

Teachers were last appointed and promoted for 2015 after the High Court had ruled that the TSC had used the wrong procedure in determining who had been eligible then.