Efforts made to ensure Ethnic Relations Commission is not politically compromised 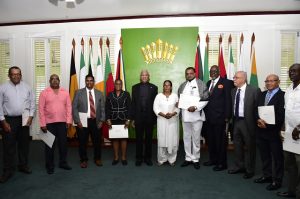 Chairman of Parliament’s Appointments Committee, Dr. George Norton on Thursday said the protracted delay in the appointment of new members of the Ethnic Relations Commission (ERC) was due to efforts to ensure the commission was not unduly influenced by politics.

“Both sides of the political divide were feverishly working towards it (Commissioners’ appointment) but yet you had to be careful and in being careful, there was some tardiness and, of course, I being the Chairman from the government got the blame,” he said.

Norton, who is also Minister of Social Cohesion, made his  comments to Demerara Waves Online News moments after the ERC Commissioners took the oath of office before President David Granger.

Norton noted that then ERC Chairman, Juan Edghill was clearly a political functionary as he went on to become a Junior Finance Minister under the then People’s Progressive Party Civic-led administration and was retained as a parliamentarian for that party now in opposition.’What we are trying to avoid is a situation that happened before where if you are Chairman of the Ethnic Relations Commission, one would expect you to be free, fair and unbiased.

We had a Chairman of the Ethnic Relations Commission, who in his sojourn, traversed that road to Damascus (sudden turning point in his life) and next thing you know he was on a political party slate. I can’t see how that could have happened overnight. We have to to avoid situations like that, less we will find someone who is serving as Chairman of the Ethnic Relations Commission  with a political bias,” he said.

The first ERC was established in 2002-with Edghill as it s Christian representative- and expired in 2006.

President Granger urged the ERC Commissioners to “discharge their duties without cowardice, without malice and without prejudice”.

2018-02-22
Denis Chabrol
Previous: Teaching Service Commission’s appointment paves way for teachers’ promotions, appointments
Next: ExxonMobil was not entitled to CGX-like contract- Jagdeo; “We are not going back on it”- govt