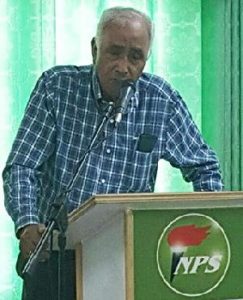 PARAMARIBO – Suriname should take on the role of mediator in order to prevent an armed conflict in the region as a result of the border controversy between Guyana and Venezuela, prominent sociologist and political commentator Derryck Ferrier, said here during a special radio show about the border controversy.

This would “certainly be beneficial to Suriname to take such an initiative as a good neighbor and good friend of all countries involved”, according to Ferrier.

He noted that Suriname maintains close relationships with Guyana, Venezuela and Brazil, which in the meantime has promised support to Guyana.

Guyana and Suriname are yet to resolve their border dispute over the New River Triangle that Paramaribo claims as hers. Venezuela around 2015 had also dropped Guyana as a rice supplier and switched to Suriname for its grain supplies.

In recent weeks, there hace been growing fears in the region that an armed conflict between Venezuela and Guyana is imminent, after Venezuela resolutely rejected the United Nations step to send the controversy over the validity of the 1899 Arbitral Tribunal Award to the International Court of Justice in The Hague for a definitive resolution. The past several weeks the Venezuelan Minister of Foreign Affairs began a tour to several countries in the region, including Suriname, to seek support for Venezuela’s position.

Immediately thereafter a Brazilian government delegation came to Suriname to convey the Brazilian position. Meanwhile Brazil continues to openly chose Guyana’s side in the conflict and reportedly conveyed to Caracas that an invasion of Guyana will not remain without military consequences.

In his presentation Ferrier gave a brief historical overview of the origin of the dispute and the current state of affairs. He also pointed to the economic and geopolitical interests of, among others, Brazil and the United States of America especially the substantial oil interests of American multinationals including ExxonMobil in Venezuela. In the meantime, ExxonMobil has also found significant oil reserves off the Guyanese coast that it plans to produce in 2020.

Brazil, on the other hand, wants to consolidate and even increase its markets in the Caribbean.

Ferrier expects the USA to choose the side of Guyana because of its oil interests in order to continue to have access to oil reserves.

Annexation of more than half of what is currently Guyanese territory, Ferrier said, could disrupt the plans of Brasilia to establish a trade corridor from northern-Brazil to the Guyanese coast in order to access and create a larger part of the regional market. On the Guyanese coast, Brazil wants to build a deep sea port to ship its products to the Caribbean and North America more easily.

A substantial part of the regional market is currently controlled by Colombia and the Dominican Republic. Politicians and entrepreneurs from these countries fear that the Brazil-Guyana corridor will provide Brazil with the opportunity to competitively market its industrial products to Caribbean countries such as Costa Rica, Nicaragua and Guatemala where they have a dominant market share.

On the other hand, countries in the Caribbean, according to Ferrier, fear escalation of the situation regarding the border controversy between Venezuela and Guyana “because such a situation can cause major damage, especially to the economic interests of the smaller Caribbean countries and especially the islands in the Caribbean”. Among other things, he points to a possible serious decline in tourism as a result of an armed conflict in the region. According to Ferrier, this matter is “very complicated”, mainly because of the great economic interests of, among others, Brazil and the USA in the region.

Other countries that are not directly involved in the conflict should therefore take initiatives in the short term to force the countries concerned to engage in dialogue and peaceful discussions. Suriname should take the pioneering role in this context, according to Ferrier.

Guyana maintains that the 1899 Arbitral Tribunal Award is full, final and perfect.

Prominent legal adviser to Guyana on border matters, Sir Shridath Ramphal has said an ICJ decision would be binding instead of merely advisorial and persuasive.

Venezuela and Britain, Guyana’s former colonial power, in 1966 agreed to send the border controversy to the ICJ, also called the World Court if mediation fails, in keeping with the United Nations Charter.