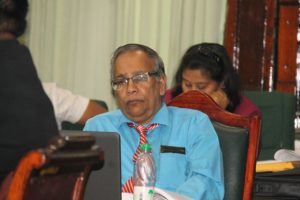 Guyana’s Auditor General, Deodat Sharma says his officers will shortly begin a forensic audit of City Hall, in the wake of the repeated failure to account for almost GY$174 million to the Public Accounts Committee (PAC), State auditors or the Local Government Minister.

After concerns were raised by Committee members during Monday’s sitting of the House’s bipartisan PAC, Sharma said he would conduct the forensic audit even if no documents are found. He later told reporters that, unlike regular audits, depending on his findings he would dispatch a report to the Director of Public Prosecutions (DPP) for “charges to be laid.” “Yes, because we are not getting information since last year to now. I don’t want to preempt so when we go in there, we are going to look at whatever they give us and then make a pronouncement,” he said.

The PAC on Monday decided to leave open a section of its agenda dealing with City Hall’s spending of GY$173.50 million after City Treasurer, Ron Mc Almont (not Ron Eastman as was previously reported. Demerara Waves apologises to Mr. Eastman for the error) failed to attend the PAC meeting because he was ill. “I am not surprised that the Treasurer is sick today. This is a lot of weight to carry around- burdensome,” remarked PAC member, Juan Edghill of the People’s Progressive Party Civic (PPPC).

Fellow PPPC member of the PAC, Nigel Dharamlall, who called for the special audit, police intervention and criminal charges, remarked that the Mayor and Councillors also need to be sanctioned because they have authority on expenditures. Dharamlall called on on the Permanent Secretary of the Ministry of Communities, Emil Mc Garrel to pay more attention to how City Hall is accounting for funds being provided to that local government organ.

Mc Garrel also told the Committee said as far as he was aware the Finance Committee of the Georgetown Municipality was responsible for the procurement of goods and service with the guidance of the Public Procurement Act.

The 2016 Auditor General’s report states that GY$200 million were paid to City Hall for the Georgetown Restoration Programme by three vouchers. As at December 31, 2016 the Council reported on capital works having spent GY$173.505 million- GY$131.382 million on five projects and GY$42.123 million for the purchase of office equipment and furniture.

In response to Dharamlall’s question, Mc Garrel said “I have not” seen approvals by the Council for the various payments. 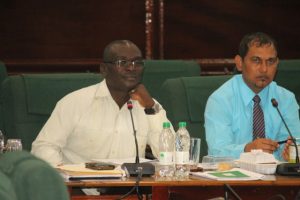 After the Audit Office of Guyana observed that “the related contracts, payment vouchers and other supporting documents were not presented for audit examination and the office equipment and furniture were not presented for physical verification”. The Ministry of Communities said “vouchers and related documents were presented and are with the auditors for verification. The list of capital items (office equipment and furniture) are available for physical verification by the auditors for the various locations/ departments and sections”.

At the PAC meeting, the Permanent Secretary of the Ministry of Communities said the Auditor General and the Treasurer are legally mandated to interface with each other and his office could only act as a “facilitator”. “In relation to the municipalities and the audit under Chapter 28:01, Sir it is very, very clear that the responsibility is the Treasurer and the Auditor General has the leverage of sanction, of imprisonment,” he said.

Mc Garrel said GY$500 to GY$600 million were transferred to pay waste disposal companies directly after verification and corroboration of information from the Council and the companies.

With regards to a GY$300 million allocation to Georgetown in 2015 for a restoration programme, the Auditor General found that of the 212 payment vouchers examined, there were 167 instances totalling GY$159.968 milluon where there was no evidence of the payment vouchers being certified by the Accountant or any other authorized officer; approval by the City Treasurer was not seen on 140 payment vouchers totalling GY$143.682 million; there was no evidence of the Finance Committee approving 58 payments totalling GY$48.404 million, and there was no evidence of receipt or payee acknowledgement for a payment of GY$750,000 to a contractor and the basis for the award of several contracts for the weeding of parapet, desilting of drains and cutting down of trees in various areas of Georgetown could not be determined due to the unavailability of the relevant supporting documents.