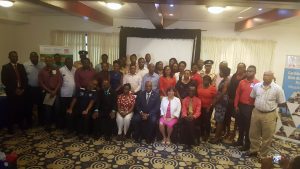 Participants in the Mass Casualty Responders and Incident Command Courses.

Fresh from specialised training that ended Wednesday, 39 mass casualty personnel, under the umbrella of the Civil Defence Commission (CDC), will be deployed on Republic Flag Raising night and Mashramani, official said.

The CDC’s Deputy Director-General. Lt. Col. Kester Craig told Demerara Waves Online News that the aim is to treat critically injured persons and rush them to the nearest hospital.

He said at D’Urban Park, venue for Flag Raising on February 22, 2018, a Venue Operating Centre (VOC) would be established from where senior personnel would be monitoring ‘spotters’ who will include police, ministry of health personnel and the Guyana Fire Service. Should there be an emergency at D’Urban Park, seriously injured persons would be rushed to an Advance Medical Post that would be established in the compound of Castellani House at Vlissengen Road and Homestretch Avenue.

Craig said on Mash Day, along the route from D’urban Street to Vlissengen Road, ambulances would be located at strategic points to move injured persons along specified routes to the nearest hospital.

In collaboration with the United Kingdom, Canada and the Pan-American Health Organisation (PAHO), 39 persons were trained as Mass Casualty Responders and 42 others in emergency coordination through an Incident Command System course. Participants in the courses that were conducted from February 5 to 14, 2018 were drawn from 14 stakeholder agencies including police, fire, security, military and the health sector.

“The participants were trained in something called ‘triage’ so if you have a major incident, you have to triage and first deal with the critical people and then you have the not so critical and those who just minor injuries could be sent away because you don’t want to overwhelm the responders’ capacity and you want to focus on those most critical persons,” he said.

Noting that the training programmes were relevant due to increasing impacts of man-made and natural disasters including climate change, he said the skills should remain “razor sharp” by agencies using the Incident Command System in dealing with issues.

Facilitator, Peter Burgess said the two courses included final practical exams for Mass Casualty Responders course that were conducted at D’Urban Park up to about 1 AM Wednesday. PAHO Resident Representative, Dr. William Adu-Krow announced that discussions have already begun to formulate an Incident Command and Mass Casualty Policy by year-end.

The PAHO official said he was informed that most “senior professionals” from the participating agencies never participated in an Incident Command course before. Steps are in train, he said, for more senior officers from the Prison Service, Guyana Fire Service, Guyana Police Force and the Georgetown Public Hospital to receive similar training.

Canada’s High Commissioner to Guyana, Lilian Chaterjee told the closing session for the two courses that the Caribbean is seen as “one of the most exposed regions to natural disasters”.

Minister of State, Retired Lt. Col. Joseph Harmon highlighted that government is very committed to efficient and effective disaster response capacity such as an increase in the subvention to the CDC from GY$4 million in 2015 to more than GY$90 million in 2018, the establishment of Disaster Risk Management mechanisms as well as foster better relations with the Barbados-based Caribbean Disaster Management Agency and the Union of South American Nations (UNASUR).

He added that First Responders are being trained in all 10 administrative regions as well as specialised training has been provided in the interior regions- Region (Barima-Waini), Region Seven (Mazaruni-Cuyuni), Region Eight (Potaro-Siparuni) and Region Nine (Upper Essequibo-Upper Takatu). “We have focussed on those regions because of the distances involved and the fact that you do not have mass casualty centres that are very close,” he said.