Guyana to get oil refinery; site identified at Linden 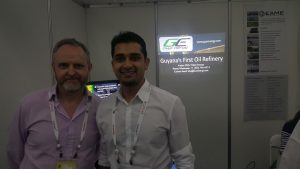 Plans are moving ahead to build a modular oil refinery to produce fuels for the Guyanese and northern Brazilian markets, with the major sources of crude expected to be from ExxonMobil or any other supplier at competitive prices, officials said Friday.

“The plan is to basically start construction at the end of this year and through next year so that the refinery is ready for operation early 2020 to coincide with first oil,” said Operations Director of  the locally-registered company, GuyEnergy, Steve Rowan. He is responsible for environmental risk and impact assessments, acquiring permits and other technical evaluations including ground conditions.

The cost for building the modular refinery in Guyana is just under US$100 million. He said the feasibility study and business plan dates back to 2011- four years before ExxonMobil began discovering huge oil reserves offshore Guyana- when GuyEnergy had planned to import crude at the open market rate.

GuyEnergy’s Chief Executive Officer Turhane Doerga had long questioned why a government-funded expert, who had said it would have made no sense to build a US$5 billion an oil refinery in Guyana to refine 150,000 to 200,000 barrels per day, had not considered the option of building a modular refinery.

The locally-registered company, GuyEnergy, says the facility, which will be built in Linden, will have a capacity of 30,000 barrels per day. Minister of Natural Resources, Raphael Trotman has said Guyana’s daily oil consumption is 13,000 to 15,000 barrels per day. Rowan hoped that Guyana would be able to source its high-quality crude to be refined in Guyana for local consumption.

During the three-day GIPEX 2018 that wrapped up on Friday, the company told viewers at its exhibition booth that site selection, a feasibility study and preliminary design have been already completed for the project.

GuyEnergy also says that following government’s letter of no-objection tendering for plant and equipment supplies have already begun, even as funding meetings with investors are continuing. The company adds that it has already received expressions of interest from the state-owned Guyana Oil Company (GuyOil) and a Brazilian retailer to supply gasoline and diesel to 850 gas stations in northern Brazil. “One of the business reasons for the location of the refinery is that it will also supply products to northern Brazil which was supplied by Petrobras but Petrobras has broken up now,” he said, adding that the development of the Linden-Lethem road would be an incentive.

Rowan further explained that Linden has been selected as the home of the refinery because that town already has small-vessel berthing facilities that were once used for the now scrapped alumina plant, land for industrial facilities and skilled persons. “Because of the legacy of manufacturing in Linden, there is a reasonable proportion of people with technical skills, a technical institute there so the right type of people to train and bring into the process,” he said. The Operations Director said, unlike Linden, there is no appropriate location for off-loading for an oil refinery.

He said the company intends to hire 100 workers, 90 percent of whom are expected to be Guyanese who would be trained in late 2019.

The GuyEnergy Operations Director said, despite concerns about the shallowness of the Demerara River due to insufficient dredging, his company’s shallow-draft vessels would be able to sail up that waterway to the refinery. He assured that the vessels have sufficient safety mechanisms to significantly reduce the chance of an oil-spills and the high-tech refinery would include leak-detection monitoring systems.

The company official said ordinary Guyanese would be allowed to buy shares in GuyEnergy through private placement so it is “literally a Guyanese entity owned by Guyanese people”. “One of the important aspirations for us, as a company, is that within the equity structure of the firm we want to create space for Guyanese people to invest even as small shareholders,” he said.

GuyEnergy intends to apply to the Environmental Protection Agency for approvals in another six months.

The company intends to invest its profits from fossil fuel into clean energy sources such as solar, wind and hydro.

Turhane Doerga was previously head of Alesie Rice Mills, and recently he was one of the key advocates for large-scale growing of industrial hemp.