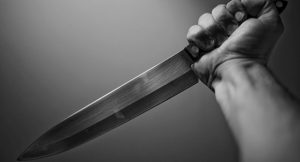 A 64 year-old pensioner yesterday violently attacked and wounded an employee of the Guyana Power & Light Inc. who was a member of a disconnection crew that went to the Lot 128 Sophia resident’s home to disconnect her electricity, police said,

“Minutes later, a police patrol responded and during the process of arresting the female suspect, who was still armed with a knife which she allegedly used to stab her victim to his right jaw, slashed the female rank on her left hand before being subdued,” Guyana Police Force spokesman, Superintendent Jairam Ramlakhan said.

The victims were escorted to the Georgetown Public Hospital where they were treated. The Woman Constable was sent away whilst the Linesman was admitted in a stable condition. Today he was discharged.

“The suspect, whom investigators learned is suffering from a mental disorder, has been released on bail and the case file will soon be forwarded for advice,” police said.