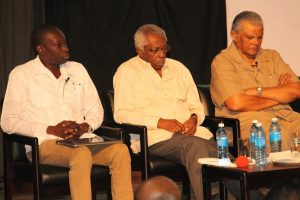 Guyana can go the International Court of Justice (ICJ) alone on the border controversy even if Venezuela refuses to participate in that process, according to two leading frontier experts

Their assurances came against the background of concerns about whether Venezuela first has to agree to have the case taken there.

Ambassador Cedric Joseph and former Head of the Frontiers Division of the Ministry of Foreign Affairs, Ambassador Keith George made their positions known at the University of Guyana’s second conversation on Law and Society titled “Guyana’s Borders: Boundaries, Barriers, or Bridges”, held at the Theatre Guild Thursday evening, January 1, 2018.

“If Venezuela says they are not going to the court, I think taking into account whatever case we put up- the history of the Geneva Agreement, we will have to (show) that jurisdiction is acknowledged, we would have to make the first move to the court and see if Venezuela will stay out,” Joseph told the well-attended event.

Between 1899 and the late 1940s, Venezuela had acknowledged the Tribunal Award that had settled the boundary until claims by a junior lawyer in the tribunal that there appeared to have been a conspiracy against that Spanish-speaking nation.

On whether Venezuela would comply with an ICJ ruling, Joseph noted that in 2016 The Philippines brought the case of the South Sea China against the “powerful” People’s Republic of China who did not participate and “the court went ahead, examined all the documents and issued a substantial judgment in support of the rights of The Philippines” which applied to Malaysia and Vietnam.

Instead, Venezuela reiterated its position that the controversy over whether the 1899 Arbitral Tribunal Award was full, final and perfect should be settled politically through the UN Chief’s Good Officer’s mediation process. On that point, Ambassador Joseph said that is not a political issue and Venezuela would have to “advance legal arguments to establish your case of nullity” before the ICJ- one body established in the UN system to do so. 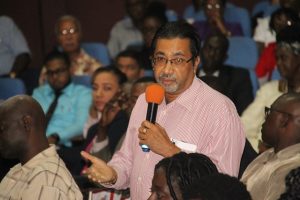 (1) and Article 36 (2) of the ICJ requires parties in a dispute to agree to have it settled at that UN judicial body. “It’s a consent regime. You can’t take Venezuela kicking and screaming to the court. It’s a consent regime. I have said that publicly, I have said that privately and nothing in the Geneva Agreement specifies the ICJ,” said the former Guyana Foreign Ministry official. While there are several new issues, he is confident that Guyana’s lawyers would produce the desired results.

Ambassador George said Guyana remained hopeful that Venezuela would participate in the judicial process but so far that appeared unlikely. “There are two possible outcomes-, of course, Venezuela joins us we hope and concludes the process and accepts the award; the signals are that, perhaps, that will not happen. If that does not happen, there are some other countries that have gone through the same,” said George, who is now Guyana’s Ambassador to Suriname. He said there have been similar instances such as Cameroon and Nigeria in which the latter for several years had refused to remove its military facilities from Cameroon until several years.

Guyana maintains that it no longer wants to engage in now 51-year old fruitless political talks through the Good Officer’s mediation process, but instead wants a judicial settlement. The UN Secretary General earlier this week decided to refer the controversy to the World Court because there was no significant progress in 2017 the high-level mediation by his Special Representative Dag Nylander.

Former Chief-of-Staff of the Guyana Defence Force, Retired Major General Joseph Singh said when he accompanied a United Nations team on a fly-over of the Essequibo Region they were surprised that that area of Guyana was inhabited. He remarked that Guyana’s Social Studies curriculum was not “going in too much depth” to educate students about local history

He said the protection and preservation of Guyana’s sovereignty was also the responsibility of the education system and ordinary Guyanese who provide information to police and soldiers. “We have produced a lot of stuff which, perhaps, need to be republished….Vigilance- and this is not only the preserve only of the military and the police. We all have to be vigilant. We all have to recognise, read and listen and that includes our diaspora who have access to information which will be very helpful to us and our diplomats,” said Singh who was up to recently Special Assistant to the President of Guyana.

Ambassador Joseph remarked that the “serious problem” that would face Venezuelans is how to convince themselves that Essequibo is not theirs when the ICJ rules in Guyana’s favour. “That is a major problem informing, conditioning Venezuela’s response to a definitive settlement. I am not making a judgement of right or wrong. I am stating a fact.”

Top current and retired police and military officers, academics and policy makers were among those who attended the public forum.