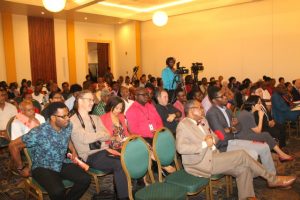 A section of the attendees at the University of Guyana- sponsored ‘Turkeyen-Tain Talks’ whose topic was “Education as Freedom: Education Reform and Socio-Economic Development in Guyana”.

The Guyana Teachers’ Union (GTU) and government are making progress in negotiations for increased salaries and other benefits, with President David Granger expected to make the final decision after he reads a joint task force report to be presented to him.

GTU President, Mark Lyte said the talks are expected to wrap up this week.

General Secretary of that union, Coretta Mc Donald told Demerara Waves Online News that her negotiators were “very confident” that teachers would be getting a pay-hike and that the union would be satisfied with the offer.

“It is making progress and I can say to you that the union is quite satisfied with the way the discussions are taking place,” said Mc Donald who is also President of the umbrella Guyana Trades Union Congress (GTUC). 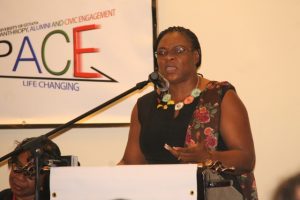 That event was held Wednesday, February  28, 2017 at the Pegasus Hotel. The trade unionist said in that presentation that payment of higher salaries must be a key component of education reform.

“If we are seriously talking education reform then we seriously need to look at the remuneration because in that way we are going to be able to select the best minds, best and qualified minds and, of course, when we have them there, then we can seriously start talking of persons being satisfied, and persons wanting to give their best, commitment and dedication,” she said.

Mc Donald said after the talks, a joint task report would be presented to the President. “It will be one written, comprehensive document that will not only deal with salaries and better working conditions but looking at education holistically and the improvement not only for teachers and students but how do we tackle most of the issues that we are facing,” the long-serving trade unionist said.

Speaking at the ‘Turkeyen-Tain Talks’, the GTU General Secretary, without naming anyone directly, seemed t o suggest that advocates of education reform were merely giving lip-service by sidelining the union or conveniently inviting them to fora. “The teachers’ union must be allowed to actively participate in strategic decision-making relating to aligning the education system with national, economic, political , social and technological developments,” she said.

Mc Donald said the absence of professional and academic uplifting of teachers, use of age-old teaching methods dating back to 1923 , manually writing notes of lessons and schemes of work in  a technological era, desire for miracles from one or two-day workshops, no financial or promotion benefits from courses, demoralising teachers, little or no consultations, burdening of headteachers with secretarial and administrative duties, no opportunities for teachers in the hinterland, and no revision of the teachers code of ethics.

The task force was established in October 2017 by President Granger after negotiations between the GTU and government collapsed over the Minister of Education, Nicolette Henry’s announcement that teachers would have received the same pay-hike as public servants. The GTU-government negotiations were salvaged when President Granger summoned the GTU top brass and said that pay-hike would be treated as “interim” and that he would set up a joint task force.