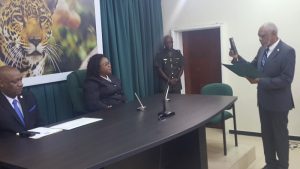 Retired Justice Donald Trotman was Wednesday morning  sworn to head a Commission of Inquiry into the Lindo Creek massacre of eight miners in 2008.

Trotman took the oath of office before Chief Magistrate, Ann Mc Lennan in the presence of Minister of State, Joseph Harmon.

Trotman said he was “honoured” to be appointed the lone Commissioner to probe the incident in search of the truth. “The main objective of this inquiry is to find the truth, to bring healing and closure to the families, relatives and friends and all those who require justice to be done in this particular instance to bring healing and closure to the nation as a whole,” Trotman said. He hoped that the Lindo Creek and other inquiries would help bring about healing and reconciliation among Guyana. “We are looking to the past in order to make peace for the present”.

He said the Commission would include all those persons who know and have  information and come forward to say what happened in the national interest and in the interest of the people and government of Guyana.

Trotman said it is important to know the truth. “There must be integrity, independence and impartiality and that must be sent and felt by the people concerned, the families concerned and the nation as a whole and those also who have entrusted this Commission with the responsibility of conducting the inquiry,” he said, adding that he was glad to be serving under the “scholarly and enlightened” presidency of David Granger.

He noted that he has served Guyana under seven presidents.

Harmon said the commission has been given an initial three-month period until the end of April, 2018.

“We do not put a fetter on the Commission,” he said.

The State Minister said the last of the massacres-Lindo Creek- is still fresh in persons’ minds, when asked why government decided not to hold inquiries into the Lusignan and Bartica massacres.

“The Commission of Inquiry will make recommendations on actions to be taken on all persons and/or organisations that are deemed responsible for the death of those persons,” Harmon said. “We, as a government, feel that an inquiry is necessary to know precisely what happened to our citizens at Lindo Creek,” he added.

The State Minister, however, said it would be the Commission rather than the government that would have to determine whether any senior officer should be sent on leave during the period of the inquiry.

Expressing confidence that the probe would be conducted at the highest professional level based on Trotman’s decades of expertise, experience and immersion in the field of law , Harmon urged Guyanese with information to come forward and testify. “I urge all persons who may have any information to cooperate with the Commission by submitting statements and memoranda and be prepared to give evidence before it,” he said.

Government will be providing, among other resources, researchers to aid the work of the Commission.