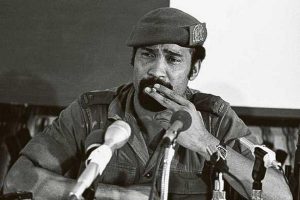 PARAMARIBO, Suriname; In the high-profile trial against Suriname’s former army leader Desi Bouterse, his lawyer on Monday made a stirring appeal for his client to be freed of the murder charges.

Bouterse, main suspect of the so-called December Murders, is on trial for murder and co-perpetration of  the murder of 15 critics of his then regime on 8 December 1982. At his command, sixteen men were arrested on the night of 7 to 8 December that year and transferred to Fort Zeelandia, then the headquarters of the Surinamese National Army. Fifteen of these men were tortured that night and summarily executed. According to the then military government, they had conspired to overthrow the incumbent government by force. Bouterse became president of Suriname through democratic elections in May 2010 and won re-election in May 2015.

According to lawyer Irvin Kanhai, the fifteen victims were “traitors”. The National Army, according to Kanhai, did Suriname a great service by eliminating them. As a result, a larger bloodbath has been prevented according to him. One day, the criminal lawyer said, that “we will pay tribute to our soldiers for what they did for us on Dec. 8, 1982 and that we will honour them”. Kanhai told the Military Court that the entire indictment should be dismissed. He deemed this case inadmissible since the court refused to take into account an Amnesty Law which was passed during the course of the trial in April 2014.

If not then Bouterse had to be acquitted for the entire indictment, because the Public Prosecution did not provide any evidence against his client, according to Kanhai. He stated that numerous witnesses claimed under oath that Bouterse was not present in Fort Zeelandia at the time of the murders nor did anyone state that Bouterse shot at the victims. The defense lawyer also stated that The Netherlands should pay compensation to the families of the 15 victims because The Netherlands should be regarded as the cause of the situation at that time.

Referring to various witness statements, the lawyer stated that from 25 February 1980 when Bouterse came to power through a military coup, several coup attempts had been made to dismiss him. For example, members of the then Military Authority were invited to a paghwa celebration in a Hindu temple with the intention that they would be poisoned or shot. That attempt failed because the military leaders did not show up.

In a crowded courtroom Kanhai said that The Netherlands played a leading role in the events around 8 December 1982. The Netherlands tried to expel Bouterse from the circles of power to help establish a government that would look after Holland’s economic interests. The Netherlands was being assisted by the United States of America, Kanhai claimed. According to the lawyer, these cases are recorded in, among other things, CIA reports and other documents.

Apart from The Netherlands and the US, the media also participated in an “intensive brainwashing” in order to make the Surinames people believe that the actions of the then government led by Bouterse were not legal. Kanhai argues that the fifteen victims were actually involved in an attempt to overthrow the Bouterse administration. They were “collaborators”. Everything was prepared “carefully and professionally”, with loyal support from crucial elements in the Surinamese society, according to Bouterse’s lawyer.