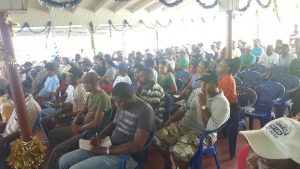 Sacked sugar workers at a meeting with several government ministers and other officials.

The Guyana government has decided to keep the Enmore sugar estate as a going concern while the search continues for long-term investors, a senior official of the divestment corporation announced Friday.

Shawn Persaud of the Special Purpose Unit (SPU) of the National Industrial and Commercial Investments Limited ( NICIL) told hundreds of workers at Enmore Estate that “hopefully” the Enmore, Rose Hall and Skeldon Estates would be “back up and running” in 2018. “While we are trying to find a buyer, we will keep Enmore up and running,” he said.

He did not say what is the name of the investor that would finance keeping Enmore/East Demerara as a going concern. Persaud said now that SPU has taken over responsibilty for the Enmore Estate, some workers would be retained based on the interest by an unnamed private investor.

“This is not going to happen overnight. We are trying and pushing for us to keep the estates as a going concern,” he said. Persaud added that authorities could not wait two years for the estates to be sold because there would be no cane and the factories would have to be dismantled.

From all indications, the government ministers who spoke indicated that government is financing a number of initiatives to help sugar workers find alternative self-employment opportunities.

He said so far, there have been 70 expressions of interest from local and foreign investors.

The privately-owned Demerara Distillers Limited wants to invest in Enmore Estate for the production of molasses for its rum facility.

The SPU official assured that no cane lands would be sold but would be leased by buyers of the sugar estates.

More than 4,000 sugar workers have been sacked with the closure of Enmore, Wales, Rose Hall and Skeldon. The Guyana Sugar Corporation intends to continue operations at Uitvlugt, Albion and Blairmont.

The acting Chief Executive Officer of the Guyana Sugar Corporation, Paul Bhim was also in attendance.