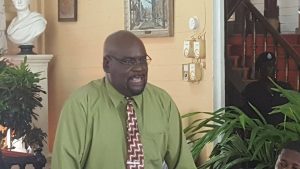 “I am in shock,” he told Demerara Waves Online News.

A meeting on the controversial use of open spaces that was scheduled for Friday afternoon has since been pushed back.

Garrett was at one time Chairman of City Hall’s Finance Committee. However, after the 2016 Local Government elections, he declined chairmanship but agreed to sit on the committee.

Councillors were said to be heading to Woodlands Hospital where he was rushed after he collapsed.

Garrett was a very strong supporter of the parking meter project.

Mr. Garrett was appointed to the position of City Councillor of the city of Georgetown on March 25, 2002.  Over the course of many years, City Hall said Councillor Garrett contributed greatly to the City of Georgetown. He was a passionate community advocate, active in the Campbellive community to the very end and he will be sadly missed by many.

He served on several committees including Finance and International Relations. On April 10, 2017, full Council appointed him as its representative on the Central Housing and Planning Authority Board.

Reflecting on her relationship with Councillor Garrett, Her Worship, the Mayor of Georgetown, Patricia Chase-Green said, “I knew him before he became a city councillor. As city councillors we worked together to make a difference in local communities. As Mayor, I benefitted from his knowledge, particularly, in the area of financial management. We had numerous meetings where he shared openly with me about his vision for his community and offered me invaluable support. He demonstrated that you can lead in a way that is bold and determined, but also with a sense of compassion for others.”

Junior, City Hall said, was a leader of another generation, but his values of integrity, respect and honesty are timeless.

“Also, he was an absolute expert in his field and a true professional, with skills and qualifications that strongly complemented a councillor role. He was an exemplary role model, a mentor and friend to many and a great advocate for the sustainable development of Georgetown.”

On behalf of the Mayor, Councillors, Officers and all at the Council and on my own behalf,  City Hall’s Town Clerk Royston King offered “my deepest sympathies to Councillor Junior Garrett’s family, friends and all those who loved him.”