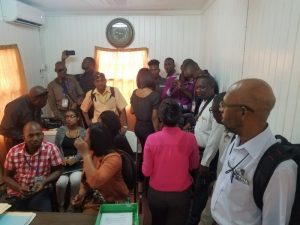 The Guyana Press Association on Thursday said it stands firmly with media workers who walked out of the Guyana Defence Force Headquarters earlier in the day following what can be described as gross disrespect for those in the profession.

The Media were initially invited to cover the opening ceremony of the GDF Annual Officers Conference on the 23rd January 2018 with no start time given.  In a subsequent email, the media were informed that they should be Camp Ayanganna at 9:30 on Thursday morning.

Upon arrival, the members of the media were told to wait under a benab just outside the compound of the GDF, after which they were corralled into a room where they were told to await further instructions. This went well beyond the time the media was invited to cover the opening of the conference.

After a few minutes, the media workers were led to the Officers’ Mess Hall where the opening ceremony was being held. On arrival, they were told to wait in the lounge area. At that point, it was clear that the event had already started as Chief of Staff Brigadier Patrick West could be heard giving his address.

A senior army officer subsequently led the media to the area where the event was being held and the media were told to stand beside dozens of officers who were all comfortably seated. It was at that point that a decision was taken to walk out.

The Guyana Press Association would like to use this opportunity to remind the Guyana Defence Force of the importance of the media, not only as a group but as a major partner that also works to ensure the integrity and sovereignty of this country. The media does not work in a vacuum and its members should be treated with the respect it deserves.

It is unfortunate that the GDF continues to engage the media in this manner even after repeated attempts to engage and work towards a better relationship.

The GPA uses this opportunity to place on record its letter of January 15th, 2018 which extends an opportunity to the GDF for more frequent engagements. To date, the GDF has not acknowledged receipt of this correspondence.

2018-01-25
Denis Chabrol
Previous: Media workers walk out of GDF officers conference
Next: Guyana yet to decide on cheap oil products for domestic use