story by Jennifer A. Dlouhy 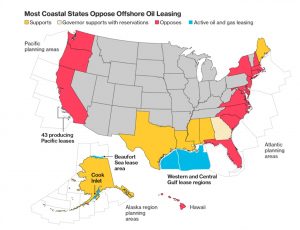 The world’s hottest offshore prospect for oil companies is off the coast of Guyana where a string of major discoveries has drawn hundreds of millions of dollars in a quest for crude.

The Trump administration is hoping to lure some of that investment to the U.S. with a proposal to sell leases in almost every inch of the nation’s outer continental shelf — including territory hugging the U.S. East Coast that share characteristics with Guyana, a tiny South American country.

Geologists speculate that those U.S. waters could hold an equally tantalizing amount of crude oil and natural gas. But oil companies may not be willing to endure the high production costs and public opposition to find out. Gushers of litigation are more likely than gushers of oil.

“The industry’s focus is elsewhere, and just because the government says you can drill doesn’t mean companies will do it,” said Pavel Molchanov, senior vice president at Raymond James Financial Inc. Companies have no shortage of other prospects around the globe — without the costs and risk of the American East Coast, Molchanov

Drilling there could mean overcoming — or at least ignoring — the objections of every state government on the East Coast except that of Georgia and Maine, as well as widespread public hostility. More than 140 municipalities from Florida to New York have declared their opposition to offshore drilling, according to the conservation group Oceana.

That’s a significant barrier. Although the Interior Department can still sell offshore tracts over the objections of affected governors, states could make things difficult for oil companies that would have to stage equipment near offshore drilling operations.

Almost certain lawsuits by environmental groups, state attorneys general and other drilling opponents could undermine lease sales and stall drilling, mirroring how seven years of litigation threw into jeopardy leases in the Chukchi Sea off the coast of Alaska that were sold in 2008.

The Interior Department’s draft leasing plan also includes southern California, where decades of oil production illustrate the existence of crude, but where there is deep local opposition to drilling that dates back to the 1969 Santa Barbara oil spill. And it includes the forbidding Arctic waters north of Alaska, where the technological challenges and high costs of doing business — illustrated by Royal Dutch Shell Plc’s unsuccessful multibillion dollar drilling campaign — are enough to scare off many companies.

“The inevitable lawsuits will keep this in limbo.” Molchanov said. “The East Coast and West Coast have the highest level of controversy over whether drilling is appropriate or not, and that’s where the governors are opposed. The idea that companies would want to put actual capital dollars into those areas — it’s pure fantasy.”

Interior Secretary Ryan Zinke already vowed to take Florida off the table after complaints from the state’s governor, Rick Scott, ruling out lease sales in the most logical new region for oil companies to explore: The eastern Gulf of Mexico, which is near existing oil production, pipelines and processing facilities.

By contrast, little is known about potential resources along the East Coast, because existing data stems largely from decades-old geological surveys and more than four-dozen wells drilled in the 1970s and 1980s. The old wells generally turned up natural gas and some indications of oil — too little to be considered commercially viable at the time. But a new generation of sophisticated three-dimensional seismic studies and drilling could pinpoint more.

“It’s just unknown territory,” said James Knapp, a geophysicist at the University of South Carolina. “Nobody can reasonably say that we know what’s out there.”

Petroleum geologists say there’s reason to be hopeful, however, based on discoveries in other parts of the Atlantic Ocean near Ghana, Angola, Brazil and Guyana — places that once butted up against what is now the continental U.S.

“There have been major discoveries up in Canada and across the Atlantic over in western Africa and South America — a very similar geologic setting — so one has to wonder why there wouldn’t be those kind of resources on the U.S. Atlantic,” Knapp said.

Geologically, the area has a big advantage over the Gulf of Mexico, where an underground ribbon of salt blocks seismic waves from revealing oil reservoirs while also making it tougher for drill bits to reach them. There’s no such barrier in the Atlantic.

“That huge salt canopy is one of the obstacles to opening up new plays in the Gulf,” said John Snedden, a geophysicist in charge of the University of Texas at Austin’s Gulf of Mexico Basin Depositional Synthesis Project. “On the East Coast, you don’t have that big salt sheet to deal with.”

Another benefit: Any oil and gas lurking along the East Coast could be technically easier to reach, located closer to the surface of the sea and under relatively low pressure. By contrast, oil companies have been pushed into deeper depths of the Gulf of Mexico, where ultra-high pressures strain the capacity of equipment, make wells harder to drill and increase costs.

The oil industry has long lobbied for more offshore opportunities, with the American Petroleum Institute leading the way. “Many of those areas haven’t been looked at with our modern technologies and modern techniques for over 30 years,” API President Jack Gerard said. “Why would we continue to deny that opportunity?”

But oil companies tempted by other prospects around the globe have been cool to the administration plan, despite the recent rebound in crude prices.

BP Plc chief executive Bob Dudley noted during an interview with Axios that his company already has “a very full plate in the United States.” And Shell spokesman Curtis Smith said that while “more options are always preferable when it comes to potential lease acreage,” it’s too early to know how the potential offshore U.S. lease sales would play into the company’s future portfolio decisions.

American waters have long been a top target for oil companies. But without an array of new U.S. options, oil companies are increasingly moving their dollars — and their rigs — to other promising prospects around the globe.

“The administration has taken notice of some significant investment dollars being spent” elsewhere, said William Turner, a senior research analyst at Wood Mackenzie. “This is a well-intentioned attempt to attract more of those investment dollars into U.S. waters.”

— With assistance by Ari Natter, and Eric Roston