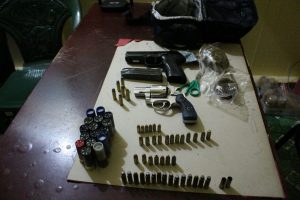 The arms, ammunition and marijuana that were seized by police during a probe into a double murder at Pomeroon.

Guyanese police Tuesday afternoon said they detained two suspects in the shooting death of two men in the Pomeroon River and in the process seized 62 rounds of ammunition, two guns and a quantity of marijuana.

“During the interview one of the persons who is assisting with the investigation led the police to a  location where a bag was retrieved and examined,” the Guyana Police Force said in a statement.

Homicide detectives said they Tuesday morning detained two persons, including the widow of one of the victims, were detained to assist with the probe. “The hands of the two deceased and both persons who are assisting with the investigation were swabbed for gunpowder residue,” police added.

Police said the guns, ammunition and marijuana found in a bag are alleged to be the belongings of one of the murdered men. The items seized are

a) One 9mm Beretta pistol with magazine

2018-01-16
Denis Chabrol
Previous: US court jails man for 41 years for the murder of Guyanese girl
Next: Trump’s offshore oil plan will struggle to lure rigs from Guyana