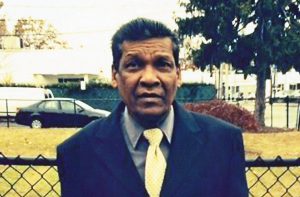 Dhanraj Mangra and his wife escaped the violence of Guyana to start over in New York City.

Twelve years after they made the move to safer shores, the 68-year-old father of five was dead.

He died at Queens Hospital after a pair of muggers attacked him and he slammed his head against a parked car, his heartbroken wife said Thursday.

“It’s not right that they killed him,” Bibi Mangra, 63, said about the two creeps, as tears streamed down her face. “They want his wallet? Take it. But don’t kill him. He’s an old man, he’s not a young person.”

“He was a very healthy person,” she explained. “I know he’s a strong person. He never complained about stomach pain, anything. I was so surprised to hear (about the heart attack).”

As Mangra fell, he hit his head on a parked car, cops said. The heartless muggers ran off with his iPhone, his credit cards and cash, police said.

The Mangras were married for 46 years and have five grown children.

“He was a very good husband,” the grieving widow said. “When I would come home, he would always be cooking something for me.”

She grew more suspicious when she prepared her husband’s funeral.