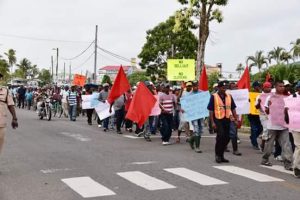 The Guyana Agricultural and General Workers Union (GAWU) is challenging the legality of government paying half of the severance pay to 4,000 former workers of the state-owned Guyana Sugar Corporation (Guysuco) by month-end.

“It seems that while the grass is growing the horse is starving and it is apt to note that the workers’ redundancy payments are a legal requirement. Certainly it is due in full payment at the end of the month’s notice period – December 29, 2017,” GAWU said in a statement.

Similar sentiments were echoed by GAWU President, Komal Chand at a public meeting held at Skeldon where the estate and factory have been closed.

GAWU is objecting to President David Granger’s announcement earlier this week that GY$2 billion in severance would be paid at the end of January and another GY$2 billion in the second half of the year.

The sugar union used the opportunity to call on the President and ministers to go into the sugar-dependent communities and meet with residents directly.

“The President’s approach, through a message to the National Assembly, to communicate what is depressing news we note is different from his predecessors.

While we accept that each leader will have his or her own style, for the thousands that are affected by the callous sugar plans it only aggravates the deep wounds that have been inflicted. It is time that the President and his Administration walk the villages, engage the workers and their families and tell them what plans his Government has for them,” GAWU said.

The union called on government to pay severance in a timely manner because  “the receipt of those payments is critical to their sustenance at this sorrowful time.”

Saying that sugar workers are facing a “depressing situation”, the union contended that government has been wasting monies on re-painting buildings, clearly a reference to the repainting of State House from white to green and the construction of a more than 10-foot tall comcrete fence around the Ministry of the Presidency.

“President Granger’s message pointed out that the Government is finding difficulty to accumulate the funds required to offset the severance payments though the Administration was aware for some months that the monies had to be found for such payments.

But for the sugar workers who last received earnings on December 29, 2017, the repainting perfectly good buildings or building impressive fences as well as other extravagances do not seem to illustrate there is a lack of finances,” GAWU said.

Referring to Granger saying that more than GY$30 billion in subsidies have been doled out to Guysuco in the past two years, GAWU questioned how sugar production slumped by 40 percent within the past two years at a time when employment costs have fallen by 15 per cent in the same period.

GAWU said a GY$100 million grant for sugar workers to pursue other economic endeavours “is equivalent to a measly $25,000 per displaced worker.”

“Such sum, we contend, is hardly sufficient to engage in any serious economic activity. That sum is even inadequate to get off the ground the heavily touted plantain chip and cook-up rice endeavours,” GAWU said.

The workers have been laid off as a result of government’s decision to close Skeldon, Rose Hall, Enmore and Wales estates and target an annual sugar production of 147,000 tonnes from Albion, Blairmont and Uitvlugt estates.

Guysuco’s sugar production costs far outstrip the price being paid for the sweetener on the world market.

The privately-owned Demerara Distillees Limited wants to take over the Enmore estate to produce molasses for its booming rum production.