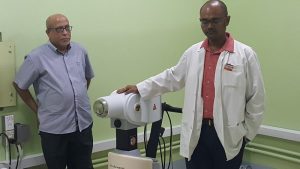 Cancer patients were Tuesday warned against relying on herbal medicine to cure the dreaded disease, even as the Guyana Cancer Institute showed off modern radiation technology that targets tumors and does not damage nearby organs.

The Institute’s Director of Outreach, Dr. Syed Mujahid Ghazi said he has nothing against herbal and spiritual approaches, but at the same time he appealed to cancer patients and their relatives not to abandon conventional therapies.

“When they come to us after six months or five months, they are at a higher stage where they cannot come back and we see it every year. Every year, I lose three or four women. I am telling you, last year I lost three of my breast cancer patients because they were distracted from the treatment,” he said.

He used the opportunity to appeal to Guyanese businesses to fund care and treatment of cancer patients at the Cancer Institute of Guyana.

Saying millions of dollars have been spent on research and development of treatments, he urged patients to ignore those who warn them that chemotherapy and radiation therapy will kill or burn them. “I beg people, I request of people if you want to advise somebody, advise them you can use them together with the treatment; you can add it but for God’s sake don’t tell  people don’t do the treatment,” he said.

Ghazi and Medical Director and Consultant Oncologist of the Cancer Institute of Guyana, Dr. Sayan Chakraborty used the start of Cancer Awareness Month to call on women to take advantage of free pap smears  in January and referral for treatment if necessary. “When people come in here, we try to help them and, if not, we have a strong partnership with the Department of Oncology (at the Georgetown Public Hospital Corporation),” Ghazi said.

The Guyana Cancer Institute believes that public awareness over the years has been paying off, but says it is too early to calculate whether there is a decline in the number of cases. Chakraborty said he saw about 75 to 80 cervical cancer patients last year  and they are all still alive, but they need at least five years to determine their survival rate. He added that the Institute has observed that persons are turning up with cervical cancer in its earlier stages. “In the beginning, women were coming in the late stages but slowly and gradually through awareness efforts, there are less and less persons with higher stages of cancer,” he said.

The Medical Director of the Cancer Institute said “the statistical data is not yet mature” but the number of cervical cancer patients he has been seeing in late stage three and stage four is showing signs of decline. “I can say one thing definitely- that the number of patients I used to see in advanced stages- stage three, stage four- right now we are seeing more in lesser advanced stages that stage four. There was a time when almost every patient I used to see I would find them in advanced stage three or event stage four,” he said, adding they would not have taken the treatment and bleeding for several years.

Gahzi said the Cancer Institute was receiving full support by the Ministry of Health and more women have been turning out at rural treatment centres.

The Cancer Institute of Guyana boasts that it now has new and modern technology- a brachytherapy machine- to destroy cancer tumors without damaging nearby organs. “This new machine can pinpoint treatment to tumors only and provide safety to normal structures,” Chakraborty said.

Acquired three months ago, the brachytherapy machine is already registering a “fantastic response” among the 20 patients who have received that focused radiation therapy which costs GY$300,000 in Guyana compared to GY$1 million n the Caribbean.

The Cancer Institute of Guyana is receiving support from the Healthy Caribbean Coalition and the government of Australia.