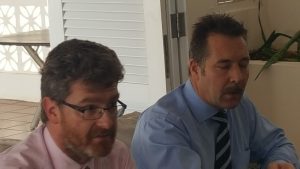 A British Financial Investigations Advisor to the Special Organised Crime Unit (SOCU) on Tuesday expressed grave concern that there has been little movement in investigations and cases of financial crimes totalling almost GY$300 billion.

“Unfortunately for SOCU, they have been inundated with a number of forensic audits,” Sam Sittlington said, adding that of the 26 audits, persons have been charged in connection with four of them for GY$116 billion. “There is quite a substantial amount of money involved in these cases”. He said the remaining 24 forensic audits account for an estimated GY$170 billion.

Additional, he said SOCU has acted on only two of the 39 cases referred by the Financial Intelligence Unit (FIU), taking them to court.

Sittlington said he would soon meet with SOCU special prosecutors, the Director of Public Prosecutions, Shalimar Hack and Police Legal Adviser, Retired Justice Claudette Singh to ascertain the reasons for the delay.

The Financial Action Task Force, he said, measures Guyana for the number of prosecutions for terrorist financing and money laundering as well as the number of assets confiscated.

He said the Police Legal Adviser should receive assistance from the Special Prosecutors to help fast-track the process. The former British law enforcement agency said delays were unfair to, among others, those who are being investigated. “I need to get to the bottom of that and try to establish why they have these different views, what sort of evidence structures they are looking for to take the case to court. Those time delays are, in my view, unfair and unfair to the people who are tge subject of those investigations and unfair to the police who are conducting the investigations; they don’t know where they are going wrong so we need feedback from all three departments,” he said.

He also observed that the court system is “abominably slow”.

Noting that SOCU prosecutors are also practising law privately, he restated that there is need for “one good lawyer” at that unit of the Guyana Police Force.

He began a new tour of duty from now until March 2020 during which time he would be spending six months in Guyana.

Sittlington has been hired by the British government as a Financial Investigations Mentor/ Advisor for SOCU. He will mentor the Head of SOCU, Assistant Commissioner Sydney James in reviewing all current investigations, advise and guide including recommending the lines of enquiry to be followed. Sittlington is also mandated to help liaising with local and foreign agencies to progress SOCU investigations, provide practical advice and guidance to lawyers at the DPP and the Attorney General Chambers on proceeds of crime generally and in relation to specific cases. While here, the United Kingdom advisor will liaise with the judiciary, including magistrates, about progress in money laundering and asset recovery cases.