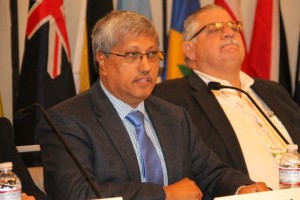 Worried that government’s downsizing of the state-owned Guyana Sugar Corporation would have negatively impact on rum production, the privately-owned Demerara Distillers Limited (DDL) said it is considering investing in the sugar industry to keep molasses production afloat.

“In light of this shortfall, DDL has been actively exploring its potential role in the future of the sugarcane industry, and has executed a high-level technical and economic feasibility study on innovative approaches to use the existing sugar assets to meet the current and future needs for molasses for an expanding distilling industry,” the company said.

The company noted that while Guyana’s total molasses production is pegged at 52,000 tonnes, there would be an 18,000 tonne shortfall in 2018 to satisfy a projected increase in distillery production by a further 25 percent over 2017.

DDL noted that its international marketing is paying off but now, the company would suffer a shortfall in molasses and the cash-strapped Guysuco would “in turn is a significant source of cash flow” for its operations.

“With the impending closure of sugar estates, there will be a considerable short-fall in molasses availability, which is directly related to the reduced projection of sugar production,” DDL said. 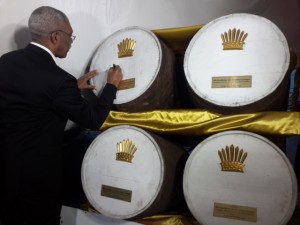 FLASH BACK: President David Granger signing off on several casks of 50-year old Demerara Rum that will be stored for another 25 years–Guyana’s Diamond Jubilee. The 50-year old rum has been produced by Demerara Distillers Limited in honour of Guyana’s 50th Independence Anniversary on May 26, 2016

The rum and beverage company noted that Guysuco has set a sugar production target of 115,000 tons at the three estates- Uitvlugt, Blairmont and Albion- currently earmarked to remain in operation, with molasses production being pegged at 52,000 tons.

DDL said its initial assessment of its distillery production for 2017 shows that is has surpassed projections, with an increase of 30% over 2016.

DDL said it welcomed the comments from Minister of State, Joseph Harmon last week, indicating that the government is still open to options that keep the GuySuCo estates operational until arrangements are finalised for them to be privatised.

DDL Chairman, Komal Samaroo, said that “we are optimistic that the Government of Guyana understands what is at stake, not just for the sugarcane industry, but for all other stakeholders that are a part of the GuySuCo value chain, including the many thousands who are directly and indirectly involved in the production, distribution and sale of DDL’s value-added products, both locally and internationally.”

DDL recalled that President David Granger had said at the Launching of DDL’s Special Edition 50th Anniversary El Dorado Rum in April 2016, when he said, “Guyana’s rum industry is precious; it must be protected and preserved in the face of peril. Workers’ jobs and the livelihood of those who indirectly depend on the industry are at stake. The loss of foreign exchange and excise earnings by the industry can result in severe problems in our economy. Guyana’s rums are an important economic sub-sector. It is in the national interest to ensure the survival and sustainability of this industry and the Government of Guyana is committed to supporting this industry.”

The company said given the fact that the performance of the distilling industry in 2017 has been a bright spot for the local economy, building on the success of El Dorado – one of Guyana’s few, truly internationally-renowned brands – the imperative of finding compelling solutions to guarantee its future sustainability goes without saying.

“DDL is committed to playing an active role in forging the next steps for survival, and has been engaging all stakeholders, including the Government of Guyana.”

During a recent visit in October 2017 to DDL’s facilities by Prime Minister Moses Nagamatoo and Minister of Business Donomic Gaskin, the matter of molasses supply was raised. In remarks after the tour, Prime Minister Moses Nagamatoo offered assurances that molasses supply for DDL would be secure. He said, “Those who are saying that sugar is dead, or will be dead, should come and take a tour of DDL’s bond and factory, there is abundant need for molasses … so I don’t see today any sign of the death of the sugar industry. Guyana will continue producing sugar once there is a need for molasses.”

Minister Gaskin, commenting at the same event, said that “it was good to get a walk through and get a glimpse of their manufacturing facilities,” he commended DDL as “one of the biggest value-added companies in Guyana and probably Guyana’s most successful value-added company.”

Upon announcement by DDL Chairman Komal Samaroo of the company’s three-year $10 billion investment programme, Minister Gaskin wished the company well with its expansion plans and said that “the government stands ready to give support to DDL wherever possible.”

This support is crucial in recognition of the jobs to be created and the significant increase in taxes contributed to the national economy from greater earnings. In 2016, the DDL Group paid $1.9 billion in taxes, excluding VAT, and is project to pay in excess of $2.2 billion for 2017 based on its performance.

2017-12-31
Denis Chabrol
Previous: Head of SWAT team under close arrest for large quantity of whiskey
Next: GDF announces promotion of officers, other ranks