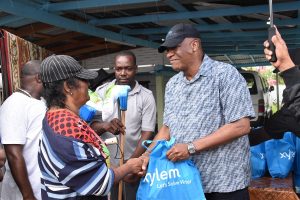 A number of residents of flood-affected West Bank Demerara areas are being assisted to keep away water-borne illnesses as authorities ensure the drainage network there is cleaned periodically.

The Minister said that all of the drainage channels, pumps and sluices in the area are functioning effectively and systems have been put in place to ensure that they are maintained so that there is rapid drainage of the area during the low tide. “The koker is working well. The pumps are working well; it’s a question of keeping the canals clean. As you come in from the front all the way down you’ll see that the canal is … very clean, but we have to keep it clean and we have to have in place a system that ensures that the canal is kept clean and that is what we’re working on at the level of the NDIA, the Region, the NDC and the Civil Defence Commission,” he was quoted as saying in a statement issued by the Ministry of the Presidency.

Minister Harmon also said that the CDC, which falls within his purview, has activated its 24-hour National Emergency Monitoring System (NIMS) to observe flooding across the regions, in order to determine how best to deploy limited resources.  “We … are monitoring all of these areas. I have a report from the CDC on all of the coastal areas from Regions Two all the way to Region Six, Region Ten, Region Nine, Region Seven, Region Eight so I have at least 12 hourly reports from those communities. We’ve established and they are running the [NIMS] and that is a system that is working 24 hours a day receiving reports and information from all of the communities across the country. Once we look at the information that has come out, we make a plan… Of course, there will be citizens who are calling in about reports of flooding, but we need to make a very careful analysis of all of the information before we actually deploy limited resources,” he said. 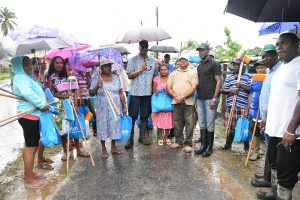 Minister of State, Joseph Harmon and a number of West Bank Demerara residents shortly after they received brooms and mops to help with clean-up operations after flood waters recede.

The Minister also noted that the investment in public infrastructure works has paid off as areas along the East Coast Demerara have not been as heavily affected as in previous years where hundreds of persons suffered immense losses.

Meanwhile, Region Three NDIA Engineer, Mr. Lall Piterahdaue said that although all of the drainage structures are functioning, these efforts are being stymied by continuous, intense, overnight rainfall. “This process started on Christmas Day due to the above normal rainfall that we are having. We had some build-up of water, especially at the lower end of Canal Number One. What we have done so far is to employ both manual and mechanical means of cleaning the channel to ensure that the water is flowing rapidly to the sluice. Currently… there are three sluice doors at the head of the channel that is draining into the Demerara River – all three are functioning, and also we have two pumps. When those doors are closed [they kick] in so that we are able to have full drainage of the area,” he said.

Mr. Piterahdaue also said that the NDIA has also employed two excavators, provided with assistance from Mr. Komal Singh of GAICO Construction and General Services Incorporated, to remove moss that grows on the bridge to ensure that there is free drainage of water. He expressed confidence that once the rain lessens or stops, the waters will drain off rapidly.

“What we are doing definitely would have an impact once the rain eases. As you notice, we are making sure that the channels are maintained, but the rain; we’re still having heavy rain during the night which would return whatever water has been drained so what we are doing is to ensure that all sluices are functioning, all pumps are functioning and the channel is being cleaned as required,” he said.

Meanwhile, residents were loud in their praise of the Government’s efforts to assist them with cleaning supplies and with ensuring that the health centre is fully stocked and ready to respond to emergencies.  To date, there have been no reports of water-borne diseases although residents, like Ms. Deowattie Persaud said that she was able to access medication to help her to manage other ailments. Ms. Dolly Basdeo and Mr. Deonarine Deosaran also expressed gratitude for the hampers. “It means a lot because he [Minister Harmon] come and he say what the situation is. He come and he help everybody, Mr. Deosaran said.

A similar distribution exercise will be held Saturday in Albouystown, South Georgetown to help affected residents.