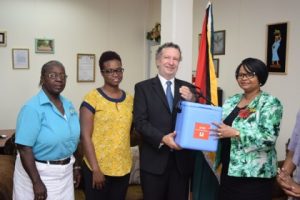 Minister of Public Health Volda Lawrence, receiving a portion of the MMR vaccines from Brazilian Ambassador to Guyana, Lineu Pupo de Paula in the presence of Director of Family Healthcare services in the Ministry, Dr. Ertenesia Hamilton.

A total of 10,000 units were received to aid in the continued fight against the MMR viruses. The Brazilian Ambassador noted that, “This is the second donation that Brazil is offering for the Ministry of Health, this year.”

Earlier in 2017, Brazil and PAHO/WHO donated drugs to help counteract Leishmaniasis, a parasitic disease found in tropical and sub-tropical countries. Ambassador Pupo de Paula said that, “It is in our interest to help to vaccinate children and everybody…This just shows how good the relationship between the two countries is going.”

“We do have a lot of persons traversing through Guyana, whether they are coming here to find work or to invest or whether they are using here, as a ‘jump off’ point to some other neighbouring country”, the Minister was quoted by government’s Department of Public Information as saying.

She alluded to the fact that there were outbreaks of the MMR viruses in neighbouring countries. However, she noted that through efforts made by these countries and the PAHO/WHO, efforts were put in place to prevent the spread of such viruses.

Although these outbreaks did not affect Guyana in any significant way, Minister Lawrence emphasised that the vaccines acquired will “ensure that we have a stockpile of vaccines…We have a vaccination programme in Guyana we are catering for that through our budget and through some of our partners.”

Further, she added, “because of the high incidence of persons going back and forth, Brazilians, Surinamese, Venezuelans and so on, this boost will help us to take off that excess and ensure that we always have, to be able to help our sisters and brothers from the neighbouring states.”

In issuing the MMR vaccine, the adult population will be primarily targeted. Director of the Family HealthCare Services, MoPH, Dr. Ertenesia Hamilton detailed that, “Some of our adults are still at risk because they would have not benefitted.…So this donation will be aiding in improving the immunization of our adult population, and those persons, who would have not been caught in the normal immunization programmes.”

More specifically it was further explained that the adult population in Regions One, Two, Seven, Eight and Nine (regions sharing borders with Venezuela and Brazil) will be the first to access vaccines from this donation. “Also, we try to immunize all of our officers who are first responders such as Port Health Officers, our Immigration officers, our police and our soldiers”, Dr. Hamilton stated.