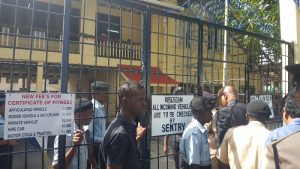 Opposition Parliamentarian, Juan Edghill was Tuesday suspended for the remainder of all sittings until February, minutes after he was arrested at Brickdam and Avenue of the Republic and prevented from entering Parliament Building.

Edghill refused to enter the police vehicle unless he was told what offence he was being arrested for. Instead, he opted to walk to the nearby Brickdam Police Station accompanied by police and Shadow Attorney General and Minister of Legal Affairs, Anil Nandlall.

Inside the Chamber, Government Chief Whip, Minister of Social Protection Amna Ally successfully moved a motion, which did not require debate, for Edghill to be suspended from all sittings of the House until December 15, 2017.

“Following the gross disorderly conduct of the Honourable Member, Juan Edghill of the 79th sitting of parliament, I wish to move that this member be suspended from the service of the Assembly for the next four sittings of this Assembly, that is December 15th, 2017,” Ally said. 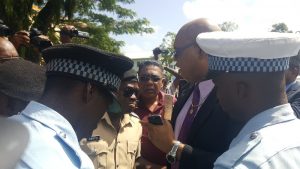 PPP MP Juan Edghill asking police on Brickdam and Avenue of the Republic to explain to him why he was being prevented from entering Parliament and being arrested.

The House Speaker then said Edghill remains suspended based on a Standing Order that “authorises penalty that goes to the end of the session. So grave is that conduct so that allowing the person the benfit of four additional days suspension is the most lenient that he could be treated”.

Reacting, Opposition Leader Bharrat Jagdeo said, “I just to wish record our significant dissatsifaction with what you just said in this Chamber. You spoke about the unprecedented behaviour but you did not speak about the unprecedented presence of police in this House. The police assaulted people and you yourselves said you did not invite into this House. I believe this is an attempt to muzzle Juan Edghill.”

Opposition Leader said Edghill, a former Finance Minister, has been targeted because he is one of the “more aggressive questioners” in “decimating” the estimates. He accused the House Speaker of colluding with the government in shielding government from scrutiny of the estimates. “We believe that was an attempt to denude us from some of our best speakers but we cannot cede our responsibility,” Jagdeo added.

People’s Progressive Party Civic parliamentarians walked out of the House after the House Speaker, Dr. Barton Scotland opted to merely consider the estimates without debate or questions on GY$34.3 billion dollars of allocations to the Ministry of the Presidency, Ministry of Natural Resources and the Guyana Defence Force.

The decisions came one day after House Speaker, Dr. Barton Scotland ruled Edghill out of order and ordered his removal from the House. At the center of the issue is the PPP’s position that insufficient time has been given for consideration of the budget estimates for the Ministry of the Presidency because four programme areas have been added to that entity.

More than one hour before the Tuesday’s sitting, more than 50 male and female members of the Guyana Police Force took up strategic position inside and outside Parliament Building. Each vehicle was checked, most likely for Edghill who claimed that he was being trailed by state operatives in unmarked vehicles.

When Edghill arrived at the police barrier, he was told by a senior police officer that the Speaker has instructed that he not be allowed to enter Parliament Building. Edghill and Nandlall repeatedly asked the police what law Edghill broke that warranted arrest.

The police could not provide answers and instead opened a police pickup door for the parliamentarian to enter. He refused and eventually said he would prefer to walk to the Brickdam Police Station.