Guyana, US, Caribbean on watch for radicalized persons, return of ISIS fighters 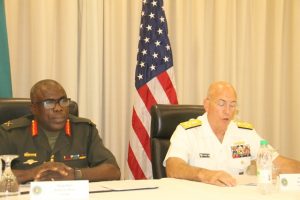 Chief-of-Staff of the Guyana Defence Force, Brigadier Patrick West and Head of the US Army’s Southern Command, Admiral Kurt Tidd briefing the media.

Guyana and other Caribbean countries are continuing to watch out for radical extremists and persons who have returned to the Western Hemisphere after serving as combatants with the Islamic State (ISIS), top local and American military officials said.

Head of the United States (US) Army’s Southern Command (SOUTHCOM), Admiral Kurt Tidd told a media round-table at the Marriott Hotel at the end of the Caribbean Nations Security Conference (CANSEC) that the meeting of mainly top Caribbean, North American and European military officers focused on threats from natural disasters and returning terrorists.

“As we discussed these challenges, we agreed on the need for a shared understanding of the security environment including the intersection of threat networks and disasters and the potentially destabilising of foreign terrorist fighters returning to our hemisphere.

We recognise the efforts of all our government approaches to creating a non-permissive environment for terrorist and criminal networks including the roles of youth engagement and employment in countering radicalisation,” Tidd said.

Chief-of-Staff of the Guyana Defence Force (GDF), Brigadier Patrick West said Guyanese authorities were keeping tabs on persons who might potentially be radicalised into extremist ideologues. “We continue to monitor from the security architecture the persons who may be exposed to any forms of radicalisation and once those persons have been identified in whatever area or community, the security architecture will continue to monitor them. We have had some successes in the past. A few stories were in the media, I think several months ago, about families,” he said.

He referred to Guyanese having been connected to a plot to blow up the John F. Kennedy International Airport and being a leader of the al-Qaeda terrorist organisation. Former Mayor of Linden, Abdul Kadir, who is also a former executive member of the People’s National Congress Reform, is serving life imprisonment in the US for that offence. West also referred to now killed head of al-Qaeda, Guyanese Adnan El-Shrukijumah.

He noted that earlier this week the United States Treasury labelled a Jamaica Muslim cleric, Sheikh Abdullah al-Faisal a global terrorist because he was allegedly helping Islamic State recruits travel to areas controlled by the militant group.

West said eyes were also being focused ISIS combatants who have since returned to Trinidad and Tobago because “it is one of concern” and “we are paying attention” to that twin-island Caribbean state.

“Trust me, today as I speak, that we are doing everything in our power to ensure that we stem the tide of radicalisation in Guyana and that if there is any issue of fighters returning to the region through the process of IMPACS, we are monitoring their movement across the Caribbean and the information sharing networks that we have across the Caribbean that we have rekindled at this conference are still going to be monitoring them

Admiral Tidd noted that the US, Caribbean and other global partners are “all struggling with this scourge of radicalisation” partly due to information that is readily available on the Internet to persons who might normally be regarded as susceptible.

CANSEC aims to improve understanding and strengthening security by information and intelligence sharing on natural disasters, terrorism;  trafficking in guns, people, drugs; and other items and cyber crimes and other criminal activities.