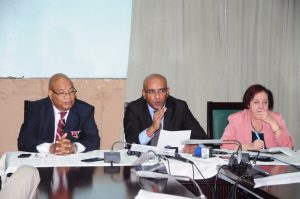 Jagdeo questioned the sincerity of government to grant amnesty to companies and individuals that have not submitted tax returns which would result in a waiver of the interest rates.

“Why now? Why this year? Why not from the very beginning of their term? Is it that there are  a few companies that they know of who have large outstanding interest and penalties that would accrue to them and they are trying to help those companies by giving them a hundred percent write-off on all interest and penalties if they do it in the next few months and then 50 percent if they do it by September?” he said. He charged that the offer smacks of a deal and called for those who owe to pay up.

He charged that government failed to outline plans to increase jobs, improve welfare, deliver a framework for growth and development, and provide clarity about the government’s vision on big picture issues.

“We had hoped that all of thee would have been part of this budget presentation…They have just fulfilled that view that they have lived up to the low expectations that people have of the government,” he told a news briefing shortly after Jordan’s more than three-hour long budget presentation. Except for a GY$500 increase in old age  pensions, he said government has not lived up to its promise of a significant hike in that welfare package.

Jagdeo, a former Finance Minister in the People’s Progressive Party Civic-led administration, accused government of fooling Guyanese that there would be no new taxes in the 2018 budget, but he pointed out that the Finance Minister announced that properties in towns and villages would be re-valued after several decades. “Although he says there are new taxes  in the budget, they are introducing a measure that, now having exhausted the tax measures at the national level, they are now taking it to the municipalities and the Neighbourhood Democratic Councils (NDCs),” he said.

With regard to the budget measures, he labelled them as “pathetic” for a broad cross-section of Guyanese in the public and private sector. Touching on the reversal of the tributors tax from 20 percent to 10 percent, he said that was in response to the opposition’s promise to do so if it wins the 2020 general elections. “It’s just a reversal of the policies that they put in place last yea…It was only because of significant pressures by us to get it done,” he said. Jagdeo said the mining sector was still in bad shape because VAT on excavators has not been reduced.

Noting that Guyana’s economy will grow by 2.9 percent in 2017, down from a projected 3.8 percent, Jagdeo said the Finance Minister confirmed that the economy has slumped. “It confirms what we have saying that the economy is not performing” and government was essentially taxing more to take monies out of the pockets of ordinary Guyanese people.

With regards to the proposed establishment of outposts at Eteringbang to collect taxes on smuggled fuel, he said government was now about to close off a virtual free trade zone that the PPP-Civic administration had facilitated. “Beyond Kurupukari and beyond the Pomeroon, we practically allowed residents who live in the hinterland communities to enjoy a kind of tax-free access to items that they use because of the high cost in the hinterland; they are reversing this policy now so it’s bringing greater burdens on people and it’s not enhancing revenue significantly,” he said.

The Opposition Leader said the Finance Minister’s uninspiring budget presentation amounted to a read-out of the work programmes of several government ministries, departments and agencies such as the Securities Council, Bank of Guyana, and the Guyana Revenue Authority. “This sort of thing is not what it takes to inspire a country to produce to expand welfare to generate jobs and so in all of those counts we have an utter abysmal failure on the part of the Minister of Finance and the government,” he said.

Jagdeo questioned the sincerity of government’s decision to embark on a more than US$37.6 million programme to upgrade the existing LTE network and other related facilities. He said government should have instead abolished the 14 percent Value Added Tax on data that it introduced last year. “Without cheap data, you cannot develop the sector and he did nothing in that regard,” he said.

Government has set aside GY$2.3 billion to commence work on this initiative, in 2018. The Finance Minister said a further US$17 million has been earmarked to ensure that vulnerable groups and far-flung hinterland communities, which might otherwise be excluded, are provided with the necessary infrastructure, hardware and software that
will enable access to high quality Information Communications Technology (ICT), training and e-services. The Finance Minister said implementation of that project is anticipated to commence in 2018 and, on completion, will see over 89,000 residents, in approximately 170 communities, having access to over 200 eGovernment ICT hubs.