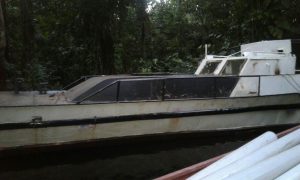 Guyanese authorities seized a semi-submersible vessel believed to be used in the smuggling of large quantities of South American cocaine to other countries.

The Guyana Police Force said a 40-year old Venezuelan man and a 40-year old Guyanese who was conducting welding repairs at the time they were found have been arrested. “The vessel is about 25 meters long ,2.7 meters in width and 2.8 meters in depth,and at the time the Guyanese national who is a welder , was effecting repairs on it, on the bank of the creek where it had been brought up,” the law enforcement agency said in a statement.

The vessel was discovered Saturday at a creek at Annbisi River,Port Kaituma ,North West District as a result of information received, the Guyana Police Force said.

The submersible vessel is currently under guard.

A team of Investigators from Criminal Investigations Department’s Headquarters,  with assistance from the Guyana Defence Force Coast Guards will be deployed to the location early Monday morning to continue investigations.

Guyana has in the past located and seized a semi-submersible in that same North West Region. That illegal vessel had been sent to the United States for further analysis by the Drug Enforcement Administration (DEA).

A DEA office, with assistance from polygraphed Guyanese law enforcement agents, has been working to go after drug barons.