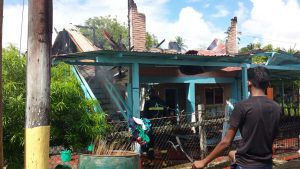 The house was owned by Parvati ‘Daro’ Bhagi.

Neighbours laid the blame squarely at the feet of the Guyana Power and Light Company (GPL), saying that technicians failed to fix a fault at a nearby transformer for the past six months despite repeated reports. 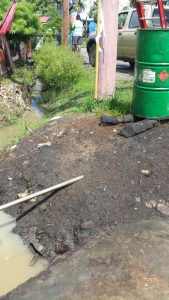 The brown area at Gap Road, Jalousie where residents said is burnt by fire falling from a defective transformer.

The occupants of the house were too distraught to recount what happened but a next door neighbour, Meena Das, said she saw when the fire started.

“This morning I hear a spark and then I see the fire runnning back to the neighbour’s house  and then we hear a big ‘boof’ and next thing you know- fire,”

She said the owner of the house and her two grand-children were downstairs when someone passed and told her the house was on fire. The neighbour said the woman attempted to enter the building to collect valuables but the fire was too much.

She said GPL technicians went to the fire scene Sunday and took a report.

Neighbours accused GPL technicians of being negligent in fixing the transformer problem. “Everytime you make a report, they come and smiling,” she said. “They come and they watch it and they say a next crew has to come”.

Her daughter, Anjanie Persaud, added that the wire sparks everyday and fire drops the fire and burns a spot. She said they usually have to extinguish the fire with water.

They are calling on GPL to rebuild the woman’s house and change the transformer.