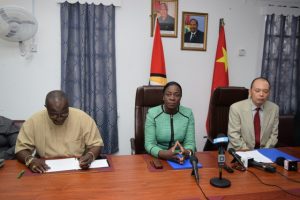 Guyana and China on Wednesday signed a Memorandum of Understanding (MOU) that will result in the upgrade and expansion of the Cyril Potter College of Education (CPCE) Science Laboratory and Information Technology Department.

The MOU provides a five million dollars grant to the Ministry of Education “to procure equipment and amenities to strengthen the science labs at CPCE,” Minister Henry explained, during the signing ceremony at the Ministry’s Brickdam office.

She noted that this would facilitate the necessary upgrades that will allow the institution to deliver an effective science programme to its more than 1000 trainee teacher across the country.

Minister Nicolette Henry said the donation will add to the initiatives already undertaken by the government to strengthen the capacity of the training college, noting that “Education is and will remain a major focus of this government.” “When we speak about teachers training, we speak about it in the context of teacher’s preparation and support,” Minister Henry was quoted by government’s Department of Public Information (DPI) as saying.

Currently, there are 22 specialised science teachers undergoing training at the college. Permanent Secretary, Vibert Welch noted that the intention is to enhance the knowledge content and skills of these trainee teachers, so they can deliver quality Science, Technology, Engineering and Mathematics (STEM) subjects at both the secondary and primary school levels.

“This agreement is a demonstration of our intention to honour that commitment. Among the immediate benefits of this MOU, lies much-anticipated impacts of the nurturing of thousands of young minds in our schools from among which Guyana will have its future scientist, engineers, technologist, and technicians,” Welch said.

He noted that with the discovery of oil and the potential concomitant job opportunities, there is an increasing need for new and innovative technologies which will translate into a highly skilled and competitive workforce. Hence, the need for both students and teachers to be exposed to the resources necessary to help them to be excellent drivers for a STEM-educated workforce.

Yang explained that the implementation process will be monitored by the Chinese Embassy and the Ministry of Education.

The project was birthed out of an engagement between President David Granger and the Chinese government. Five months prior to this funding, the CPCE received $1M from the President, which was used to procure cupboards for its science laboratories.