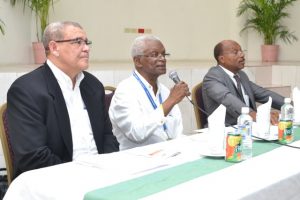 Even as the State Assets Recovery Agency (SARA) is working to recover stolen assets, which is estimated to be valued at more than US$400M, the organisation Monday morning opened a Law Enforcement Training Series on Assets Recovery and Financial Investigations.

More than 70 persons are participating in the 18-day workshop being conducted in collaboration with the Caribbean Institute of Forensic Accounting (CIFA).

The Workshop will focus on equipping the participants, drawn from the Financial Intelligence Unit (FIU), SARA, Special Organised Crime Unit (SOCU), the Bank of Guyana, the Guyana Revenue Authority (GRA) and other security agencies, with skills on how to conduct investigations, treat information and build cases.

Director of SARA, Dr. Clive Thomas, in his remarks to the participants said that the training programme is focused on educating persons, most of whom will be working at the agency once it moves into its permanent space in a few weeks, on the nature of the job and the basic elements that must be observed in their duties.

“The training covers all the basic elements of recovery of assets, how to investigate the theft of public assets, how to trace it particularly when it is put into forms that is not easily identifiable or it might be leaked overseas into foreign bank accounts and sometimes how it is transferred to other people. We have to trace the prime resource of that wealth that people get. At the end of the training we will accomplish the hope of building up resources, and skill capacity of the staff that we employ so we can do our jobs more productively,” he was quoted as saying in a Department of Public Information statement.

According to Dr. Thomas, before any case can reach the Courts, diligent and strong investigations will have to be conducted and cases formulated. In this regard, he noted that training is critical. “[It] is a highly skilled operation and part of our mandate is to train our staff to do that. We also have a responsibility under the SARA Bill to train members of the judiciary to do that. So we have a responsibility to ensure that people prosecuting on behalf of the state, the judges and magistrates who, undertake cases dealing with civil recovery of stolen assets have some training that are mandated under the United Nations Convention Against Corruption and it is part of that responsibility that we start out the programme with it,” he said.

Noting that a large volume of work and investigations are required to build solid cases, Dr. Thomas said that while the current output is slow, he is confident that the training will yield significant benefits. “Case building is something that you have to be patient about because you have to make sure that in this environment, the first set of cases that we take to the court are successful so that we build on that reputation going forward. Remember that the sums of the money involved are huge so it is worth the patience, it is worth the endeavour of trying to prove these cases systematically. This is why we have engaged the Caribbean Institute of Forensic Accounting to be the lead organization,” he said.

For the new year, the Director said that the Agency will be focusing more on training and public education. He noted that Guyanese must understand that corruption is a disease that must not be allowed to fester.

“Unless we create the skills base, unless we create the cultural and educated environment in which people see what we are trying to do, we are not going to be very successful. Ultimately people not being corrupt is a matter of culture and education and training so even though it may look like a soft activity, it is one that people will come to realize that crime does not pay,” Dr. Thomas said.

Head of the Guyana Revenue Authority, Mr. Godfrey Statia, echoed these sentiments, noting that corruption must be rooted out. He noted that while Guyana is not the only country affected by the scourge, it is taking actions, which can reduce and eliminate the incidences.

“We know that the corruption is at the top of the scale. We’re actually not alone with that. If you get the chance then I think that you should probably read the report, which is done by the Association of Certified Fraud Examiners (ACFE), you would see that in Latin America and the Caribbean corruption accounts for 45 percent of all the frauds that go on. So therefore, Guyana is not alone. We are in the forefront of fraud and we should try to gain as much as we could from this particular course so that we could try to reduce that fraud and to find the culprits,” he said.

The training, he noted, in addition to providing skills and knowledge, will also create a network among the critical agencies, which can see enhanced cooperation and more being accomplished. “The fact that there are so many agencies here means that at some point in time you guys are going to network. The information that you are going to see here, one particular agency would not have it. You will find until we have a common database, you will find that you would have to ask your colleagues for information and sometimes laws would stymie that type of information that you would need, but that does not necessarily mean that you cannot come together and use your resources so as to meet the end result. I’m sure that we will work together, with all the agencies, for the betterment of the country,” Mr. Statia said.

Mr. Stephon Grey, Head of the Caribbean Institute of Forensic Accounting, in providing an overview of the training said that asset recovery is a strategy against embezzlement of public funds and corruptions. International Asset recovery, he said, is any effort governments seek to patriate the proceeds of corruption hidden in foreign jurisdictions.

With regard to the level of corruption in Guyana, he said that according to Transparency International, Guyana has been making some steady improvements on the transparency index in the recent years. It is therefore commendable, he said, that Guyana has chosen to embark on this programme. “With that in mind we’d like to thank the vision of Dr. Thomas and his team for embarking on this journey,” he said.

The training will be facilitated by experts from the United Kingdom, Trinidad, Grenada and other countries in and around the Caribbean.