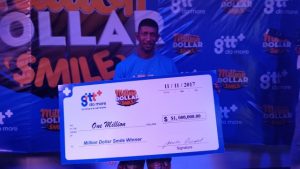 “I am happy and thankful that I won the million dollar”, said David Sital,  a cattle farmer, butcher and vendor  at the Mon Repos Market, after he emerged the winner of the GTT  Million Dollar Smile promotion held at Mon Repos, East Coast Demerara Friday evening, November 11.

The Guyana Telephone and Telegraph Company (GTT) said in a press release that with tears of joy flowing, the father of three said he is going through some tough times and the million dollars “will change my life in so many ways”.  He expressed that he owes money on one of two canters he owns and his winnings will help him to clear his debt on the canter.

GTT Million Dollar Smile campaign has made it quite simple for customers to have a chance to win millions. Every customer who does an electronic top up of $1,000 or more in a single transaction, purchase a data plan for a $1,000 or more, pay any GTT bill in full and on time, sign up for or upgrade a Blaze plan, purchase a GTT handset or purchase a ticket for the Chronixx show, is entered for a chance to win.

Sital topped up $1,000 at the event venue. His was the third number selected and called after the first two did not answer.

“I have never used another used another phone company even when others tried to encourage me to carry two numbers”, Sital said, he added that “my loyalty to GTT has paid off”. He said that he tops up in the thousands weekly.

Sital who lives in Lusignan, also on the East Coast of Demerara, said that he rears and produces everything that he sells at his stand.

He said that even though he had closed his stand and left for home earlier in the day, he ensured that he returned in time for the drawing at 7pm, with the hope and prayer that he is the lucky one.

Forty eight year old Sital is the second winner of the GTT Smile Million Dollar promotion following Maynard Carmichael who the first million at the launch of the promotion on November 6 at the Stabroek Market square.

The promotion heads to Linden on November 17, Bartica, November 24, Essequibo December 1, Berbice, December, 15 and will return to Georgetown for the Grand Draw on December 18, where we will select four winners for a million dollars each.

GTT “Doing More” for customers and communities across Guyana.