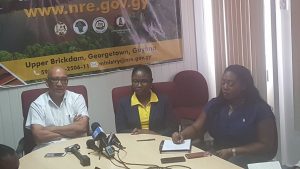 As the Guyana Gold Board continues a probe into the alleged siphoning off of millions of dollars from miners during, Board Chairman Gabriel Lall said certain board members had resisted the introduction of an upgraded and secure system that might have prevented the scam.

“You have just got me a little angry there, not with you, but with what I inherited here in that we paid tens of millions of dollars for a complete system and what was delivered here was half of a system and when I raised my voice at somebody they reported to the minister that I threatened them,” said Lall when asked whether Gold Board officials had refused to implement a more robust system because it was too tedious.

“We have a half of a system where there are people in the trenches know that this is how it operates and they try to work their way around it,” he added. Pressed on whether officials of the Accounts Department were resist changing to a Management Information System that has more checks and balances, he said “the people in the Accounts Department are aware of the limitations of the system”.

Sources have told Demerara Waves Online News that “the management information system has no controls and is massively compromised with finance staff being able to enter and make changes”. Concerns have been raised that many of the staffers own posh houses and live lavish lifestyles that will not be possible based on their salaries.

Lall said the Accountant and Clerk, who were sent on leave, have admitted to manipulating assay figures in the management information system and taking monies for themselves.

He announced that an expert, who currently works at the Ministry of Finance, has been identified to implement a secured high-tech system to manage the finances of the Gold Board.

Acting General Manager of the Guyana Gold Board, Eondrene Thompson told reporters that “the first alert I had” dates back to four weeks ago when a client who normally takes in a high quality of gold to the Board received results that showed low quality, and another one with a very low quality came back with a very high quality.

Thompson said the officers implicated had been creaming off monies for their personal benefit by taking payment advice numbers for small clients , who were selling less than 10 ounces, and put on fabricated assay certificates and a large client’s name would be used and the percentage paid out.

“They were using people who were not owed as the surrogate,” Lall added, saying that it was manipulation of the books and violating procedures and policies.

While the Board Chairman said he has informed Royal Canadian Mint, which refines and conducts assay testing on Guyana’s gold, that a probe is underway into financial irregularities, he said the scam had absolutely nothing to do with the quality of the precious yellow metal.

Lall said the matter involving the two officials, who have been working there for decades, has not yet been handed over to the Guyana Police Force.

The Gold Board Chairman said there was insufficient information at this time to say whether substantive General Manager, Lisaveta Ramtotar was implicated. “We really do not want to go there. We do not know that or we do not know enough of what we need to know. Therefore, we will respectfully abstain from answering tbat question,” he said.

2017-11-10
Denis Chabrol
Previous: City resident admits to being in possession of rifle, other items
Next: Focus on “science and technology”, not “work under the sun like a mule” – PM Nagamootoo urges Berbice youths