City resident admits to being in possession of rifle, other items The AR rifle that was allegedly found in a car driven by Daniel Nelson.

A man has admitted to being in possession of a rifle, bulletproof vest and handcuffs, even as police probe whether his firearm licence for a pistol is fake, according to police sources.

The man identified as Daniel Nelson of Church Street, Georgetown was arrested by members of the Guyana Police Force on Thursday afternoon.

“An intelligence led operation, yesterday afternoon in the city, has resulted in the arrest of a 52-year-old male of Church street, Georgetown and the seizing of an unlicensed AR Rifle with magazine, a hand cuff and one bulletproof vest from a motor car,” police said. 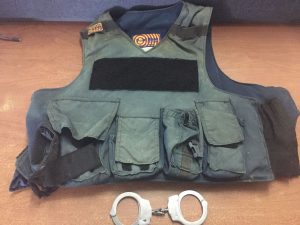 Sources said the man has since produced a small version of a firearm licence and has told investigators that the original is at home.

Investigators were said to be checking whether the licence is fake because about one year ago police had held persons in possession of bogus licences and forged letters of approval for the granting of licences.