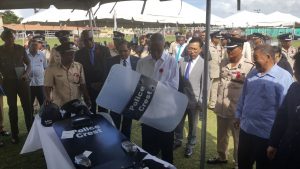 The Guyana Police Force is moving apace with plans to expand the number of police divisions from seven to 10 and open a security sector reform office under the auspices of Britain, President David Granger announced Monday.

Addressing a handing-over ceremony for the donation of US$2.6 million worth of gears, vehicles including pickups, All Terrain Vehicles (ATVs) and buses by China, he said each of Guyana’s 10 administrative regions would be police divisions and the police commanders would be reporting to the Regional Chairmen.

“The police force, as part of that reform project will adapt the same divisional structure as the ten administrative regions of our country so that every divisional commander will be able to relate to a regional chairman in the RDC (Regional Democratic Council),” he said.

The President added that every capital town would be the headquarters for a police division. “We won’t have one person commanding three interior divisions as exist at present. One region one division, one commander. That’s how it’s going to be,” he said. Currently, ‘F’ Division, whose Commander is based in Bartica, is responsible for the interior regions of Barima-Waini (Region One), Cuyuni-Mazaruni (Region Seven), Potaro-Siparuni (Region Eight) and Upper Essequibo-Upper Takatu (Region Nine). 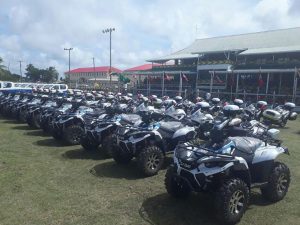 With regards to the Security Sector Reform Programme (SSRP), Granger said the project would next year be upgraded to an office. “Next year, that project would transformed into a formal department in order to implement the recommendations which are now being crafted and drafted,” he said. 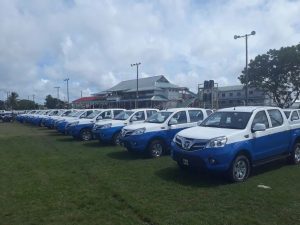 The pickups donated by China to the Guyana Police Force.

At the same time, the President urged the Guyana Police Force to respond to specific threats such as intrusion by illegal aliens, contraband smuggling, illegal mining, gun-running, fuel smuggling, and drugs trafficking which he said was at the heart of violence. “Once there is narco-trafficking there is going to be violence in the country. Once there is smuggling, trafficking in persons, there is going to be violence so let us stop that violence at the border. Let us stop that violence from coming into our neighbourhoods, in our homes,” he said. 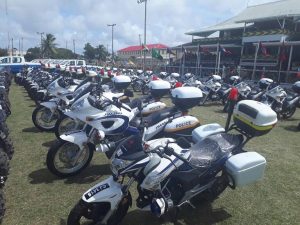 Police Commissioner, David Ramnarine assured that the vehicles would be inspected periodically to ensure that they are properly maintained.

Ramnarine said he was “integrally involved in crafting” a five-point security plan under the stewardship of substantive Police Commissioner, Seelall Persaud.  Ramnarine said since July 2015 when the President directed that that plan be crafted, there has been an “exponential increase in overseas training of all ranks in the force”. He said so far about 400 persons have been trained.

Ramnarine said a proposal was submitted for regionalising police boundaries as well as capacity building for the Criminal Investigations Department, Special Branch and increased training of persons.

In November, 2014 the Guyana Police Force received from China US$60,000 worth of items including 30 handheld radio sets, 12 motorcycles, 48 body-pack cameras with accessories, four portable power-packs and two helmet mounting kits