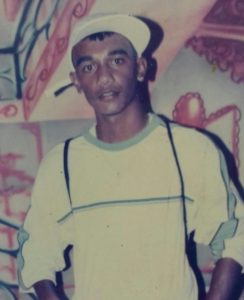 Twenty-nine year-old Vijai Rigbaran was Monday charged with the murder of a Williamsburg, Corentyne mason at the Albion Magistrate Court.

The father of two was not required to plea to the indictable charge read by Magistrate Renita Singh.

The court heard that the accused between Tuesday 10th October and Sunday 29th October, 2017 at Williamsburg, Corentyne, he murdered 54-year-old Mohammed Aslam.

Attorney-at-Law, Chandra Sohan, who represented the accused, made an application for disclosure and reported that the accused was who has mental issues tried to commit suicide while in prison.

Rigbaran is set to return to court on 27th November, 2017 for statements.

Aslam of Williamsburg, Corentyne on Sunday succumbed at the Georgetown Public Hospital, three weeks after being chopped by a suspect said to be of unsound mind.

The man’s wife, 54-year-old Bhasmattie Aslam relayed to Demerara Waves Online that he was cooking in the yard and left to make a purchase at the near by shop. On her way, she was confronted by the suspect who brandished a cutlass.

The man, she stated, who looked disoriented began dealing several lashes to her legs at which point she called on her husband to intervene. The woman stated that the suspect quickly overpowered her husband and began brutally chopping him about to body with the sharp weapon.

Bhasmattie Aslam said that despite calling out for help, neighbors were reluctant to act.

His bloody and mangled body was picked up and transported to the Port Mourant Hospital and was subsequently transferred to the Georgetown Public Hospital where he remained a patient in the intensive care unit until his demise.

When asked if her husband and suspect had any issues, the woman replied negatively stating that the suspect who resides four houses away would sometimes work with her husband and had no issues in the past.