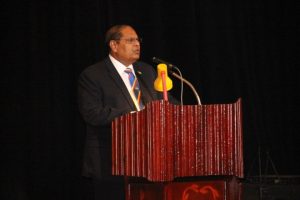 Prime Minister Moses Nagamootooo announced that ministers’ salaries would not be increased next year and he again hinted that the 14 percent Value Added Tax (VAT) on education would be scrapped in the 2018 National Budget.

“They didn’t receive a single cent for 2016 or 2017 and I would like to see and I can tell you this: ministers and members of parliament will not receive a cent more in 2018,” he said. Nagamootoo added that the time has come for other government workers, including teachers, to receive the “small goodies”.

The Ministry of the Presidency has said that all government workers who earn more than GYD$1 million per month would not be entitled to any salary increases.

The coalition-led Guyana government had come under intense criticism for awarding ministers at least a 50 percent salary increase less than one year after winning the May 2015 general and regional elections. Nagamootoo again defended that decision. “I believe that it was the right decision that you gave ministers and members of parliament a top-up in the beginning,” he said. 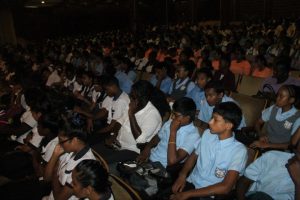 Students attending the the 2017 National Award Ceremony for Outstanding Performance held at the National Cultural Centre.

Addressing the National Award Ceremony for outstanding performance by students held at the National Cultural Centre, he appealed to teachers to be patient. “We will give consideration to teachers and they must allow us to see methods by which we could raise revenues because if you have no revenues you could distribute nothing,” he said.

Minister of Education Nicolette Henry’s announcement on Thursday that teachers would be paid the same increases as public servants has since seen government taking steps to avert a two-day per week strike by teachers from next week.

Minister of State, Joseph Harmon has since said the offer was an “interim” one and that President David Granger is scheduled to meet with top executives of the Guyana Teachers’ Union next Monday morning.

With regards to the contentious 14 percent Value Added Tax on private education, the Prime Minister said “I am confident that that would be a thing of the past”. The Prime Minister also praised private schools for their contribution to the academic achievement of students.