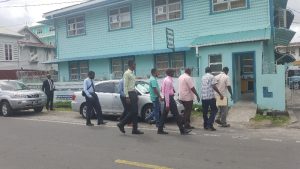 Agents of the Special Organised Crime Unit (SOCU) of the Guyana Police Force swooped down on the Guyana Energy Agency (GEA) as part of an ongoing probe into two alleged financial crimes.

Led by Head of SOCU, Assistant Commissioner Sydney James, they entered the premises at 10:19 AM.

Moments later, three agents exited the building and collected several cardboard boxes from a vehicle and took them inside the building. SOCU usually collects files and take them away for financial analysis, case-building and the laying of charges.

James told reporters that earlier Thursday his agency obtained a search warrant from a Magistrate to conduct an operation at the GEA. Asked whether the GEA refused to cooperate, necessitating the search warrant, he said “we had some challenges”.

The SOCU Chief said the probes stem from a forensic audit of the GEA and another conducted by the Ministry of the Presidency in connection with alleged “malpractices, mismanagement in relation to the purchasing of fuel” by the state-owned Guyana Oil Company and the GEA.

He said the Chief Executive Officer, Dr. Mahender Sharma and other staff were cooperating with investigators.