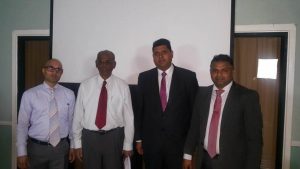 “Once you have a commission that is not respected by a section of the Guyanese people, the oil industry will be forever one in which there is political conflict. And, that is something we must try, each and every one of us, regardless of our political views, that is what we must try to avoid at any cost or the oil industry will become a political football,” he told a forum on the “Oil & Gas Sector Development and the draft Petroleum Commission Bill” organised by the Georgetown Chamber of Commerce and Industry.

Also making a presentation at that event was Trinidad and Tobago’s former Minister of Energy, Kevin Ramnarine.

The Bill provides for a Board that includes the Director of Petroleum and seven other persons including one each from civil society and another from the political opposition.

However, Ramkarran said that is not sufficient and should be increased to 12 or 15 members including one each to civil society and the parliamentary political opposition “to give them a little more weight… one extra gives more voice to the people”. The Petroleum Commission Bill, which is currently before a bipartisan select committee for wider consultation,  provides for the Deputy Chairperson and Secretary who shall be members of the Board.

The former House Speaker further recommended that the Director of Petroleum not be drawn from within the government to help build the required confidence in the system that would govern Guyana’s oil and gas sector.

He cautioned against appointing a Director of Petroleum and a Board of Directors who do not have the confidence of Guyanese and hope that friendly pressure could be placed on government to ensure it is fixed.

Ramkarran also took issue with the fact that the Minister of Natural Resources will, according to the Petroleum Commission Bill, be not merely approving appointments to the Board of Directors but will be actually appointing them. “One can understand that the government wants control; I am not quarreling with that at all. For example the Act might have provided that the board of directors appoints the commissioner. That he be approved by the minister rather than the minister doing the appointing. It is not normal for ministers to appoint secretaries of these bodies . The bodies appoint their own secretaries,” he said.

Concern was also raised about the fact that the Petroleum Commission Bill does not state how many members will make up the Commission. “It is the board of directors which the size is likely to be smaller than the commission and which has the executive authority and in fact the directs the commission, supervises the commission in its work and the board of directors is pretty small. It is a pretty small body which might very well be controlling the operations of a much larger body which appears to be only advisory,” he said.

He suggested to the Georgetown Chamber of Commerce and Industry that it should get involved in advocating how the Petroleum Commission should be structured.

Reflecting on the fact that the now governing A Partnership for National Unity+ Alliance For Change (APNU+AFC) coalition had insisted while in opposition that all revenues should be deposited into the Consolidated Fund, he said the Bill should include a provision for that. “It would be desirable for the legislation to contain a provision that funds not utilized for the business a commission itself ought to be paid to the consolidated fund on conclusion of an audit,” he said.

The Petroleum Commission Bill states that the  Board shall be responsible and answerable to the Minister for the execution of its policy, functions and duties as well as any directions and assignments given to it by the
Minister under the provisions of this Act. However, that has not gone down too well with Ramkarran, going as far as suggesting that the Bill has been copied from another country. “A lot of this legislation is just lifted from some other country and sometimes wholesale and sometimes with modification. We don’t know where it came from,” he said.

On the other hand, he said the legislation might have been crafted in that manner to secure government control because the oil and gas industry is new to Guyana and government knows very little about it