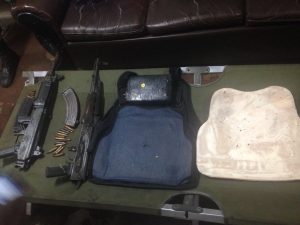 Guyanese soldiers and police believe they have made a breakthrough in smashing a group of heavily armed pirates, including foreigners, who have been operating in the North West District.

The Guyana Police Force said nine persons-including one Cuban, one Venezuelan and one Jamaican- were intercepted in a boat on the Barama River Tuesday afternoon with two rifles, ammunition and 1.5 kilogrammes of marijuana.

“These arrest are very significant as several weeks ago there were reports of piracy in the Waini River area, several miles from the Police Floating Base MV Tamakay,” the Guyana Police Force said in a statement.

Police and soldiers, the police force said, received timely information Monday evening that “a gang of armed men were in the Churches Landing Mining Community acting suspiciously and appeared to be a mix of foreign nationals and Guyanese.”

“Last Monday evening acting on timely information received a party of policemen and soldiers responded promptly during which they demonstrated the necessary courage and determination over an extended period, which culminated on Tuesday evening, with the interception and arrest of nine male suspects,” the Guyana Police Force said.