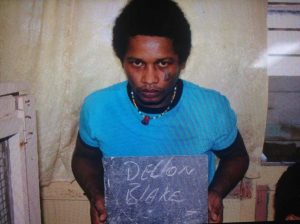 Three policemen and one prison officer are to be charged in connection with the escape of a rape accused from the Lusignan Prison earlier this month, the Guyana Police Force said.

The law enforcement agency said  a probe has been completed into the escape of Dellon Blake, and legal advice states that the four personnel, who were performing duties on October 4, 2017 must be charged under the Criminal Law Offences Act Chapter 8:10.

If the three police constables and lone prison officer are convicted for either voluntarily and intentionally permitting or aiding or abetting him to escape from custody, they can face up to three years imprisonment.

Blake, of Santa Mission, has since been captured and placed behind bars again.

The Guyana Prison Service had said the remanded prisoner had used a bed sheet to hoist himself , separate the barbed wire and scale the wall.