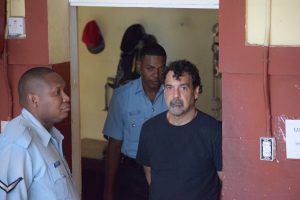 A Canadian man, who allegedly went to a mining and demanded five ounces, 15 pennyweights of raw gold, was Wednesday charged with attempting to steal.

Chief Magistrate, Ann Mc Lennan granted 54-year old Elson Bettencourt GYD$100,000 bail on the condition that he lodges his passport with the Magistrates’ Court Office. He was ordered to return to court on November 8, 2017.

Particulars of the charge are that on October 13 at Mowasie Backdam, Bettencourt demanded the raw precious yellow metal valued at GYD$1.8 million dollars from Royston Gilbert with intent to steal from Steven Cheong.

When this charge was read, Bettencourt pleaded not guilty and his Attorney-at-Law, Ronald Bruch-Smith told the court in a bail application that the charge against his client seems to be incorrect.

Meanwhile the prosecution’s case is that , Steven Cheong had employed Gilbert as General Manager of his mining operation, and that Bettencourt went to the location and threatened Gilbert while demanding the gold.

A report was made to the police and Bettencourt was charged with the offence.