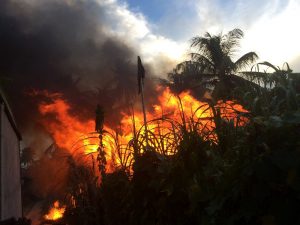 A fire of unknown origin today gutted a wooden two story home at around 5:00 pm at Rose Hall Town, Corentyne.

When Demerara Waves Online arrived at the scene of the fire at Crawford Street, public-spirited residents were battling the blaze while awaiting the arrival of the fire tenders.

Occupant of the home, Lite Moore stood helplessly in a corner with his son and two grandchildren as he watched the place he called home destroyed right before his very eyes. 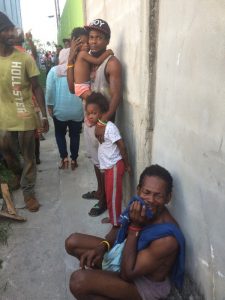 In a quick comment, the man in tears sais he was sleeping with his grandkids when he smelt smoke.

Upon investigating, he saw flames emitting from the back of the house and quickly retreated to safety.

“I was sleeping and I smell the smoke and when I get up and check it, I see the whole back get fire. So I run out with me grandchildren and come here”.

Moore stated that he could not pinpoint what exactly caused the inferno since the house was not equipped with electricity.
“The house ain’t get current so I ain’t know how it start”

The man was unable to ascertain whether his grandchildren were playing with matches while he was asleep.

An investigation has been launched.