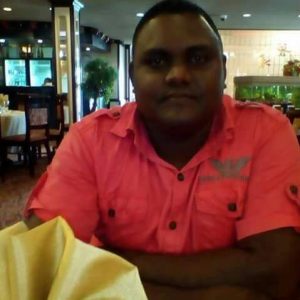 A land feud at Cane Grove, East Coast Demerara on Sunday escalated into a brutal attack that left a man chopped to death and his father and the drunken attacker hospitalised in a critical condition, police said.

Dead is Harrrynarine Ramawaj,31, a driver and farmer. His father Chatterpaul Ramawaj, 59, has been hospitalised.

Hours after that threat was reported to police, Brutus said the father and his son received information that the man was chopping their banana suckers and other cash crops. Armed with a pitch-fork, the father confronted the man during which he and is son were chopped.

“The deceased and his father plant a dam, a government reserve, for a number of years and the suspect wanted to take piece of it, threatened them earlier in the day to chop them up and kill them,” the Divisional Commander told Demerara Waves Online News.

The two  long-time occupants of the land were rushed to the Woodlands Hospital where Harrrynarine succumbed to his injuries and the father was admitted.

Police have since arrested Persaud who sustained injuries to his chest and abdomen. He, in a “highly intoxicated” state,  was taken to the Mahaicony Hospital where he received treatment and was sent away in the custody of police.