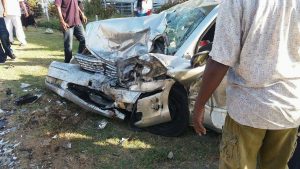 One of the badly damaged cars that was involved in the accident on the Bloomfield Village Public Road, Corentyne,.

Two drivers have been detained by police to assist with investigations following an accident at Bloomfield, Corentyne Public Road on Friday that left several persons injured, including a 4-year-old and a 7-year-old.

Those injured were Royden Grey, 31; Shaka Luke, 21; Delroy Watts, 30; Savita Persaud, 44; and Senita Budhoo, 22.
Parents of the injured students requested their names remains anonymous.
Police sources revealed that the accident occurred at about 3:30 pm on Friday afternoon just mere minutes after schools were dismissed.
Information received stated that the driver of HC 5545 was proceeding on the northern side of the public road when he attempted to overtake another vehicle. He slammed into motor car, HC 6447, which was travelling in the opposite direction, resulting in a head on collision.
Demerara Waves Online was further told that after the initial collision, the driver of another car, HC 4423, was unable to stop resulting in him crashing into the back of HC 6447. Another vehicle, HC 6446, allegedly traveling at a fast rate also slammed into the back of HC 5545.
However, no injures were sustained by persons travelling in HC 6446 and HC 4423.
The injured were rushed to the Port Mourant Hospital. Some were treated and sent away while others were transferred to the New Amsterdam Public Hospital for further treatment.
Investigations are still ongoing.