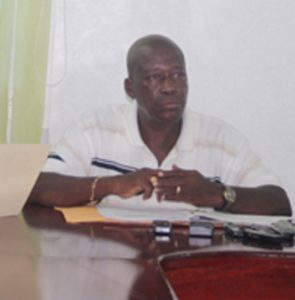 Former Permanent Secretary of the Ministry of Health, Leslie Cadogan, who was fired with immediate effect allegedly because of  lack of accountability of almost GYD$470 million dollars worth of drugs, is suing the State for wrongful dismissal and says he is owed GYD$18 million in salary and allowances.

In court papers seen by Demerara Waves Online News, he denied Minister of State, Joseph Harmon’s in the letter of dismissal dated August 31, 2015 and effective September 1, 2017 that he was responsible for the delivery of drugs. Harmon’s letter, which was tendered as evidence,  states that “Your failure to ensure that there was proper accountability in the delivery of drugs to the Ministry of Health was demonstrated in the incomplete delivery of supplies to the tune of $419,110,786 in one instance. In the other instance, you failed to ensure that the remaining 50% of $1.1b delivery of supplies was done.”

It is therefore in view of this gross negligence and misconduct in the performance of your duties that your services have been terminated,” Harmon stated in the dismissal letter in keeping with Clause 7(a) of the contract of employment with the Guyana government.

That clause states that “The person engaged at any time during the currency of his Agreement neglects or refuses to comply with any order for any cause (other than ill health not caused by his own misconduct as provided in Clause 4) become unable to perform any of his duties or shall disclose any information respecting the affairs of the Government to any unauthorized person, or in any manner misconduct himself, the Government may terminate his engagement forthwith and therefore all rights and advantages reserved to him under this Agreement shall cease.”

He is represented by Attorney-at-Law, Anil Nandlall.

The former Permanent Secretary says in court documents that at no time was the Claimant afforded a hearing or a fair hearing before the termination of his employment, and that the defendant failed and/or omitted to give adequate notice to him before his purported dismissal.

Cadogan says to date, despite his  demands for payment, the Minister of State has has failed and/or omitted to pay same.

Cadogan was also entitled to a car and a driver both provided by the Government of Guyana or a duty free concession to acquire a motor vehicle to use in the execution of his official duties.