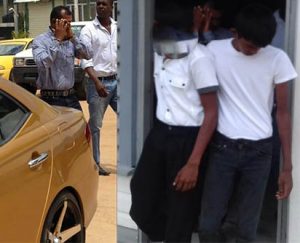 The three murder accused at the Springlands Magistrate Court.

Two men, along with a 16-year-old, appeared today at the Springlands Magistrate Court, charged with the murder of 21-year-old Mahendra Ghanie, whose burnt remains were discovered in a shallow grave last Friday.

The trio, 44-year-old Bharrat Ramsarwack, who employed the deceased; 19-year-old Mohanlall Suesankar; and the 16-year-old all appeared before Magistrate Robindranauth Singh to answer to the indictable charge.
The name of the 16-year old has been withheld in keeping with local Child Protection laws.
The court heard that between Monday October 2nd and Friday October 6th, 2017 at No. 55 Village, Corentyne, they murdered Mahendra Ghanie called “Azad”, a labourer of Bloomfield village, Corentyne.
The first two accused were remanded to prison while the teen was remanded to the Juvenile Facility. The matter was transferred to the No. 51 Magistrate Court for a report on October 18th, 2017.

As the men were being led out of the court shackled by the feet, family members were unable to contain their emotion.
The burnt remains of Ghanie were discovered on Friday last in a shallow grave behind his employer’s home. The young man had been missing for days after leaving his home for work on Monday.
After several calls to his phone went unanswered, family members suspected something was amiss and filed a missing person’s report.
However, after getting no assistance from the police, they opted to conduct their own investigations and ventured to the scene were they discovered several bone fragments in a pit at No. 55 village where he was employed believed to be that of Ghani